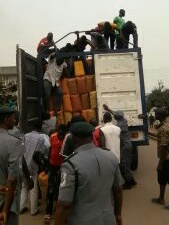 Nigeria Customs Service disperse  off  53,750 litres of seized premium motor spirit popularly called petrol in Lagos yesterday  at N2000 per jerrycan of 25litre to members of the public

The petroleum products, seized from smugglers who were suspected to be Benin Republic bound, were stored in 2,150 units of 25kg  plastic jerrycans.

Addressing newsmen at the Customs Training College, Ikeja, Garba Mohammed, Controller of Customs in charge of Federal Operations Unit, Zone A , said the seizure is part of customs efforts at protecting the nation’s economy.

According to Mohammed, operatives of the service owe the country a duty to prevent economic saboteurs from inflicting hardship on the Nigerian people through smuggling a product that is meant for use by Nigerians.

He said the seizures were made around the creeks of Seme Border leading to the neighboring country of Republic of Benin. According to him, they were already packed in boats waiting to be illegally shipped out of Nigeria.

He added that the service decided to sell it off at a location far away from where it was seized to prevent smugglers and their accomplices from buying it again and making merchandise of it.

Mohammed disclosed that the Controller General of Customs, Col. Hameed Ali approved  that some of the PMS be shared among security agencies who at various times assisted in making the seizures, to fuel their operational vehicles in the discharge of their duties.

Representatives of the Nigerian Army, Nigeria Police, Lagos State Fire Service and some units of the customs were given some of the products while members of the public were allowed to buy the product with the jerrycans.