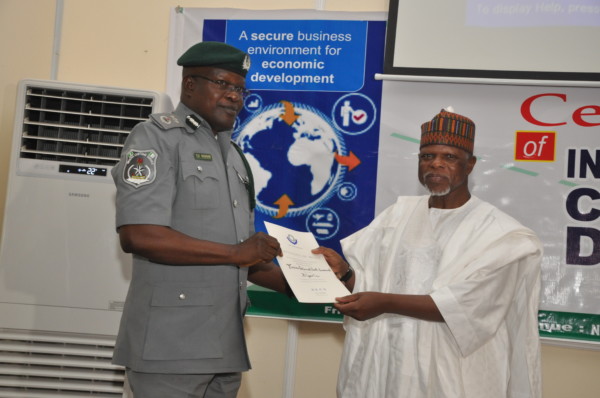 The well deserved award which was conferred on the Command by the World Customs Organization (WCO),.has this year theme as  “To Secure Business Environment for Economic Development”

Making the presentation on behalf of the WCO Secretary General Kunio Mikuriya, the Comptroller General of Customs, Col. Hameed Ibrahim Ali (Rtd), had informed the audience that the International Customs Day celebrated by Customs Administrations all over the world, provided an opportunity to x-ray, review and evaluate the role of Customs in nation building as a revenue collecting agency, stating that the theme for the year was apt considering the state of insecurity and challenges in Nigeria and the world at large.

The CGC while reminiscing on the giant strides of the Service in 2017 declared that the Service collected 1.3 trillion into the nation’s coffers as well as did remarkably well in anti-smuggling operations through the spectacular seizures among others.

He stated that the International event was also an auspicious moment to recognize private and public organizations as well as officers and units that have demonstrated outstanding performance during the period under reference for awards by the WCO.

While receiving the award on behalf of the command, the Custom Area Controller, Comptroller Yusuf Bashar recalled with nostalgia the exploits of the command in the past two years.

The obviously elated Comptroller Bashar stated thus; “I assumed leadership of the command at a time its rating was at lowest ebb in terms of functionality in areas of revenue and seizures which forms the core mandate of the Command.

“I thank God Almighty for giving me the wherewithal to justify the confidence reposed in me by the CGC and his Management which is evidenced in this International Award. I therefore dedicate it to the entire Tincan team, comprising the officers and men, the CIU, Valuation, PCA, the Customs Brokers, critical stakeholders and the media for their tremendous support”.

It will be recalled that Comptroller Bashar in the last two years collected over five hundred and forty-four billion, forty-nine million, six hundred and twenty- one thousand, five hundred and fifteen naira (N544,049,621,515) in revenue through various far reaching reforms which he instituted.

Part of the reform agenda was the building of an ICT Training Centre as well as a fully equipped clinic which was officially commissioned by the CGC on the 11th of November 2017. The training facility has been used to train over one thousand two hundred (1,200) people, including officers and other stakeholders.

On the area of seizures, the command in the past two years recorded very unique seizures which included but not limited to; Cocaine with a street value of over two (2) billion naira concealed in a container, 900 Cartridges/Military Hardware and recovery of suspected stolen two (2) Range Rover and repatriation of same through Interpol to United State of America

On assumption, the CAC drew the attention of officers and men to the change ideology and mantra of the CGC which was anchored on tripod of – restructure, reform and revenue collection. These provided an operational template and road map which guided the operation and which eventually guaranteed historical results being celebrated at the instance of WCO.

The name of the command which Comptroller Bashar epitomizes would have been written in gold, especially when he considers the trajectory of the command in the past vis-a-vis these achievements.

Responding to questions from the media after the Award, he stated that part of his strategy was the concept of “Team Spirit” which saw to his open door policy of inclusiveness, believing that team spirit is key to development with its attendant checks and balances. I also have a profiling team comprising all the egg heads, APM, the CIU, the Valuation Unit, PCA, Enforcement and indeed the entire officers and men, whose invaluable contribution cannot be quantified.

“We are very passionate about collaboration and synergy with critical agencies and we have imbibed the virtues of transparent-integrity and due diligence in our day to day dealing in line with global best practices”.