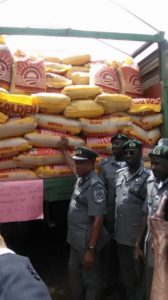 The Oyo-Osun command of Nigeria Customs Service in its bid to nip smuggling in the bud has made seizures worth a total duty paid value of N92,778,048.22 .

The seizures which  were made at different locations within the command’s area of coverage especially along Opara Ibodo Musa axis of Iwajowa Local Government Area of Oyo State, comprises of rice, vehicles, used tyres, vegetable oil and second hand clothing.

While parading news men round the seized items, the Area Controller in charge of the command,  Comptroller
Christopher Ogar Odibu  reiterates his men’s resolve to sustain its anti smuggling campaign by  leaving  no stone unturned in the drive to patrol their designated area, interdict  and seize suspected smuggled items and ensure the arrest of perpetrators.

In his words “Let me sound a note of warning and advise to all unpatriotic Nigerians who engage in smuggling of used cars , foreign rice and other contraband goods to desist from it and look for other legitimate means of businesses 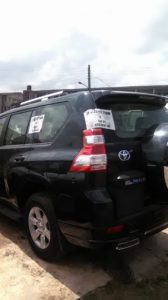 ”I want to affirm that no matter the means of conveyance or concealment of prohibited goods, I assure you that the officers of this command are on constant surveillance and monitoring and we will discover them” 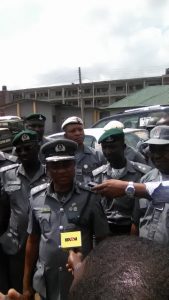