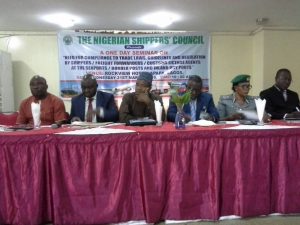 The Nigerian Shippers’ Council has decried the proliferation of arms and ammunition into the country through the seaports and border posts as a result of non compliance to the laws and regulations of the government by importers and other stakeholders.

In the bid to ensure the compliance to trade laws,  guidelines and clearance procedures in line with international acceptable best practices and to safeguard Nigeria against the importation of illicit goods, the Nigeria Shippers’ Council has put together a one day seminar with the theme “Compliance To Trade Laws by Shippers/ Freight forwarders/ Customs License agents at the seaports/border posts and inland dry ports”

In his keynote address,  the Executive Secretary/CEO Nigeria Shippers’ Council,  Barr Hassan Bello said the seminar was borne out of the increasing rate of importation of  arms and other illicit goods into the country by some unpatriotic practitioners.

Hassan Bello who was represented by the Deputy Director compliance and monitoring, Chief Cajetan Agu said that in view of noncompliance attitude among stakeholders,  there has been an ongoing crusade to sanitize the shipping industry from corrupt practices occasioned by unpatriotic,  unprofessional and unwholesome attitudes of some shippers, freight forwarders and other service providers.

Earlier, the President, Lagos Shipper’s Association,  Rev Jonathan Nicole said that the level of Compliance of stakeholders was still very low, urging all importers/exporters and clearing agents to engage government as professionals instead of fighting their lay down rules

“We need to comply with rules, guide lines and regulations concerning our trade and  as professionals we need to engage government, discuss on the guidelines and compliance of trade not fighting them” he said.

Meanwhile the representative of the Association of Nigerian Licensed Customs Agent (ANLCA),  Dr Kayode Farinto in his goodwill message stated that the level of compliance had been increasing by the day despite the unhealthy environment,  overlapping functions of regulators, bad roads and even Customs itself with more than 3 compliance teams on standby,  saying license customs agents and freight forwarders ought to be commended for their role despite the impediment to trade while Nigeria Shippers’ Council deserve award for its consistent efforts in seeking best working environment for the industry.

On his part, the President of the National Association of Government Approved Freight Forwarders (NAGAFF) Chief Uche Increase stated that the maritime industry was in shambles, hence the need to come together to rub minds on way forward even as he commended the Shippers’ Council for it’s efforts at sensitising the industry with ideas that will move it forward he stressed that non compliance had been a menace in the industry that needs to be looked into.

The lead paper presentation for the sensitization event was presented by the D.G Lagos Chambers of Commerce and Industry (LCCI),  Mr Muda  Lawal on the topic “International /Domestic  Trade Law: Benefits of Compliance to Trade Laws by the  Trading Community” while the discussant are ACG Aminu Dahiru represented by DC Ngozi,  representative of ANLCA,  Mr Francis Omotosho, representative of NAGAFF,  NAFDAC and SON.

The event which was held at the Rock View hotel in Lagos has in attendance various stakeholders in the maritime sector among whom are the  License customs agents,  freight forwarders , Nigeria Customs Service, NAFDAC and other governments regulatory agencies.