The Seme. command .of Nigeria Customs Service in it’s continued efforts at frustrating  smugglers effort has blocked illegal routes through which illegal items are being brought into the country. With its collaboration with other security agencies it is affirm  to  facilitate the necessary checks against the activities of smugglers in the axis.

The Customs Area Controller (CAC) Compt. Mohammed Aliyu  stated this while directing the construction of a wall fence to block illegal route that may purportedly be used by miscreants for various cross border crimes or vices.

Addressing the media, the Customs Area Controller reminded them on the series of Arms and ammunition seizures that were made in 2016 at the Nigeria sea ports. He told them of the Comptroller General’s alert to all border Commands on the need to maintain  strict surveillance,  as there is the possibility that the dare devil smugglers who have seen that the ports  are impassable may try crossing through the borders. He affirmed that the command is ensuring that all identified loop holes are fully sealed.  He emphasized that the use of the functional scanner machine has made it impracticable for any concealment to pass through. 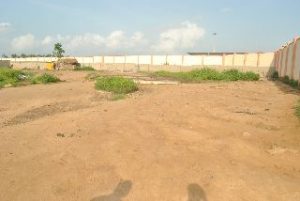 The Customs Area Controller who is also the chairman of the Joint Border Security Meeting (JBSM), said he will ensure that effective collaboration among the security agencies at the border for efficient border management and security is not compromised. This is coming at the heels of a review of the operational strategies being implemented at the command.

He reiterated the command’s resolute determination in suppressing trans-border crimes to the barest minimum, as he promised that the command will continue to enforce the Federal Government Policies on all restricted and prohibited items through the ever busy Lagos-Abidjan international corridor.

He reaffirmed his unflinching support to the reform agenda of the Comptroller General of customs, stressing that at the command level, he is working assiduously as a reformer to ensure all anomalies that pose a threat to the security of the Nation and threat to trade facilitation are addressed and corrected, while advising all stakeholders operating at the border to engage only in legitimate trade transactions and similarly adhere strictly to proper clearance procedures and guidelines.