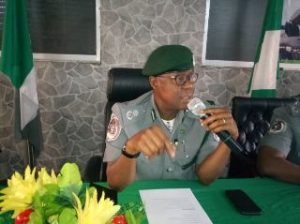 The Controller in charge of Apapa Area Command of  Nigeria Customs Service Comptroller Abubakar  Bashir has called on. bonded terminal operators to release full details of overtime cargoes in their various facilities .
Bashir who made this clarion call on Tuesday in Lagos during his fist meeting  with stakeholders,  noted that the service would encourage bonded terminal operations to thrive adding that shippers have every right to decide where their cargoes should go.
While reacting to the plights of off dock terminal operators in port operations, the Area Controller called on owners of the facilities to engage the government on how their operations can be revived  effectively,pointing out that some of the facilities are empty presently due to lukewarm attitude by the owners.
The customs boss noted that after 28 days of overtime cargoes in customs approved stations, it has the right of condemnation on the consignments.
He also urged importers and agents to ensure that they beat the deadline in the evacuation ahead of the stipulated days
He opined that there are politics in the movement of cargoes  but argued that politics and the economy cannot be separated.
“Tell members of your association to list the number of overtime cargoes in their terminals immediately and let us see how we can harness the information we have within and outside the ports to boost your operations “
“There is nothing wrong for people to patronize bonded terminals as far as customs operations is concerned .
“We in the ports will appreciate if such operations will go unhindered .An importer will be absolutely right if he decides to take his containers to wherever that pleases him.
He maintained that customs has no dealings for the low patronage of bonded terminal operators by importers and freight forwarders  but noted that the proactive nature of the operators would revamp the off dock business.
While calling on the importers to patronize off dock terminal in decongesting the seaport, Comptroller Bashir stressed the need for stakeholders to transfer some of their cargoes through barges and railways to the bonded facilities in a bid to boost trade facilitation and revenue drive of the government.
The terminal operators had earlier lamented about the fizzling out of off dock operations even as they appealed to the customs boss on how to assist on the transfer of boxes from the seaports.