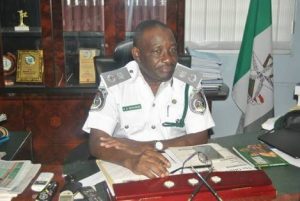 Comptroller Aliyu Muhammed of the Federal Operations Unit (FOU) ‘A’ ikeja,  Lagos has said that the tempo of anti smuggling activities will increase under his watch with persistent seizures and arrests of suspected smugglers. He said the entire south west will be a no go area for duty evaders and smugglers, thereby declaring total war against the economic saboteurs.

The anti-smuggling warlord who   made huge seizures amounting to a total duty paid value of over N1.2B barely two weeks of assumption of office as Controller in charge of the Unit , made this declaration recently during a media briefing,

The command also made the highest single seizure of smuggled petroleum products amounting to over N50M recently  at Ijofin area of Ogun State.

Mohammed , who took journalists to Western Marine Command were most of the petrol were kept, said customs authorities have approved the sale of the products to members of the public due to its volatile nature.

He told journalists that owners of the high profile cars seized in the command, did not show up with papers to prove that they paid customs duties in the vehicles.

According to him ” Most of the owners of these vehicles who said they were coming to show us documents as evidence of duty payments, did not come back for fear of being arrested. We have therefore converted the vehicles to seizures. The law supports us to raid anywhere, including car shops to seize any vehicle suspected to have smuggled into the country

”We will continue to seize the vehicles that lack customs documents no matter where they are parked. Our actions are backed by law and I have told my men to continue on this job without compromise. We are also sending words of warning to companies whose drivers use their trucks for smuggling. The smuggled goods and mode of conveyance , which is the vehicle, can be seized.

”As I speak to you, we have a beer truck used to smuggle over 400 bags of rice. The rice were concealed under the crates of beer. They think they can deceive us but we shall continue to beat them at their game.

”My advise for these smugglers is not that they should just leave the South West, where I cover. They should leave the entire country because we have the support and mandate of our Controller General to continually do our job.

”Our CG has tasked us that he is ready to reward officers for hard work and punish those who are corrupt or who compromise on their duties. I can tell you that my men want the reward that is why you are seeing these seizures. We are carrying out the anti corruption and zero tolerance for smuggling policy of our boss”

Mohammed, who was until his recent deployment, served as Controller of Seme Border, achieved the highest level of compliance at the area suppressing smuggling and arresting suspects who violates customs laws. Under him, Seme Border received accolades for anti smuggling and anti car theft achievement from Interpol headquarters in France.

His no nonsense posture and zero tolerance for infractions earned him the name of “Netanyahu of Seme” by persons who got shocked at his uncompromising position against smugglers.

Mohammed is widely expected to raise the bar and increase the tempo of FOU Zone A anti smuggling war.