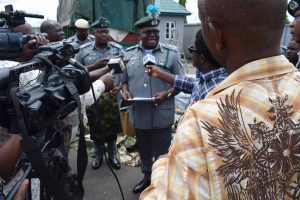 The Federal Operations Unit Zone ‘C’,  Owerri has seized a truck concealed with military hardware and medicament.
The truck  was intercepted  by the mobile patrol team in Headbridge axis of the Unit in Owerri yesterday  following a tip off from informants. 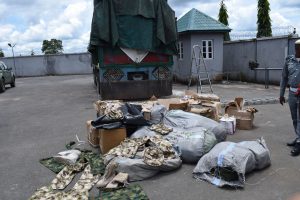 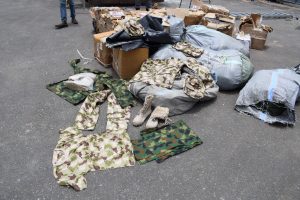 Others are 2 rolls of plain military khaki material, 7 cartons of 402 packs of hydrochloride Royal tramadol containing 10x10x10 tablets made in India,4 cartons of 60 packs Tramadol injection, made in India, 3cartons of 140 packs of CSP with codeine cough syrup made in UK, 100 packs of Diazepam made in India,  2cartons of 231 packs of Juhel D5 tablets, 1carton of 100 packs of Pankizol  including  10 cartons of new flipchart board, 51 cartons of lion school chalk with one carton of file.
Comptroller Olusemire also disclosed  that two suspects in connection to the seized items as a result of the  tip off from informants are in custody and thorough investigation is ongoing.
He however urged the public to emulate such patriotism and forward valuable information to the Service. 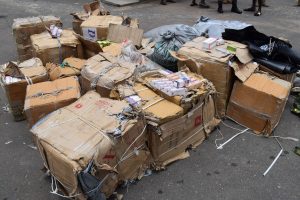 While praising the doggedness and preparedness of his officers, he affirmed that the Unit under his watch will nip the affairs of smugglers in the bud.
He did not fall to queried the aim of the importers of the consignment in concealing the military hardware and medicament explaining that the improper importation of the camouflage and medicament pose grave health and safety risks. He advised smugglers to engage in legitimate trade and called for public support in the fight against smuggling. 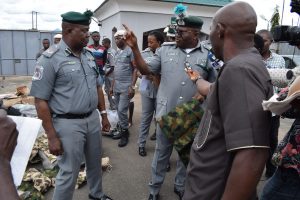 It will be Recalled that the Unit  made a seizure of military hardware earlier in July.