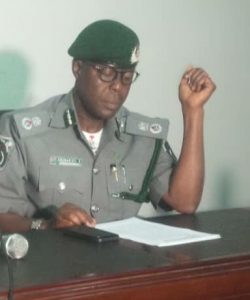 The Nigeria Customs Service (NCS) has commenced a Time Release Study (TRS) to ascertain the effectiveness and efficiency of trade facilitation in Nigeria seaports.

This is necessary according to the service to fathom if the rating of the World Bank of Nigeria is actually what obtains in the country’s trade.

Recall that Nigeria has at different times rated as the 183rd among the 189 and 110th among 119 countries where the studies were carried out on trade facilitation.
The NCS maintained that all the indexes used in the rating were done by the World Bank and that the criteria used were not comprehensive enough hence the need for the study in the country where stakeholders’ opinions and other relevant agencies involved in release of goods from the port would be sampled to generate accurate facts and figures to arrive at the accurate submission.

The Coordinator of the TRS, Comptroller Wale Adeniyi while speaking with journalists after the meeting with the stakeholders stated that the study would afford the country to know what necessary approach to trade facilitation.

According to Comptroller Adeniyi, the pilot stage is to create awareness about the study among stakeholders as well as to have an interaction with them for necessary inputs that will help in making decisions.

He said, “We are here to meet stakeholders to create awareness about the Time Release Study (TRS) Project. Time Release Study is a project that customs administration all over the world can use as a tool to measure how effective their trade facilitation measures are.

“You could automate your procedure, you could change your law, you could put the right people in the right place but you can still see how efficient these things are in terms of how much of time it takes to process the time of arrival to the time of exit from the port.
“So, this is what TRS is all about and it is being executed by a working group that comprises the customs and all the stakeholders that are involved in the release of goods from the port.
“The stage we are now is that we have come up with a questionnaire what time did your cargo arrive at the port, what time was the rotation number given, what time you get to customs, what time did you pay, how long did it take customs to process, what time did it take government agencies to process and all stuffs like that.
“We will look at where the bottlenecks are, we will then have discussions with stakeholders to see what we can do about those bottlenecks.

“Is it about changing the laws, is it about changing the procedure, is it anout reducing the number of people intervention that are involved. This is what this study is about. It is a more scientific approach to trade facilitation.
“All other indexes for earlier study were done by the World Bank and we discovered that that the criteria they used were not comprehensive enough. They don’t talk to the stakeholders enough.

The study which has a life span of six months started in July and is expected to round off in September.