My names are Oladipo Bolade Lawrence,  I am from Ondo State.I have been in this maritime industry close to three decades,  am a Customs Broker, a freight forwarder  as well as a Politician.
By the special grace of God in 2010 I went into politics and I contested against the sitting governor of Ondo  State.
I am also a consultant in the maritime industry.

I have known him now for more than 20years, because I use to look at him as a role model within our noble profession. We became very close in 2010 when he was elected as the National President of ANLCA, and I was elected as National Assistant Secretary of ANLCA, and since then We have been very close.
After our first tenure I told him am not interested in ANLCA politics again and with little persuasion I agreed to work with him as his Principal Staff Officer(PSO). That was how I took up the position of his Principal Staff Officer and if you look at ANLCA history I can say without fear of contradiction that I am the pioneer of that position of PSO. There wasn’t anything like that in ANLCA portfolio before  and probably because of the way we exhibit ourselves.
If you look at ANLCA today, you will see that people are now jostling for that position, though it is not an elected position, but just like you being a  PA to  somebody. So we have been together since that time and I don’t have any regrets working with him.

You have work with him as ANLCA Leader and also as a friend,  how would you describe him, first as a leader and second as Olayiwola Shittu.

Well, as I have always been saying, its to whoever cares to listen to me,  Shittu is a wonderful person,  his philanthropic gesture can not be overemphasized . He is a man that always wants to put smile on people’s faces  and when you get closer to such person you discover that what you benefit is  than what you put down.
I say it today there will be a time when some of us will be talking about what we have benefited from Shittu.  I told somebody some times ago that I read Geology and I serve in 1986, which means when I left University about 32 years or there about and for me to now submit myself under another teacher shows that the teacher must be a genius.
So Prince Olayiwola Shittu is a genius, because every moment with him you must learn one thing or the other.
One of the qualities in him is that he is a man that always rub minds with people and he succumb to superior arguments. If he ask you for anything and discovered that you have a superior argument he will agree with you.  He is not a leader that will say what I say is final. That is one of the secret of his success that people don’t know, most of us that are with him then, when we came in to run the affairs of the association,  we normally come down to seat together in the evening after the close of work ,  we tagged it “Brain Wave Period ” , where we look into any complain from chapters  and proffer solutions to them and at times we gather to discuss other issues.
He is a wonderful person. If I have the opportunity to work with him in the next world, I will still be glad to do that because every moment with him is not wasted,  you will always gain something.
Also, during his time, we were given international recognition. I was part of the people that benefited from such. Through him I have been to the United States to attend one or two workshops, have been to South Africa,  to Dubai even Zambia and Ghana.  Most times when you see leaders arranging such trips, one will expect them to be the first on the list, but in his own case most times he  will  be the last to go or even say you people can go I will go at my own time. You can imagine such a person,  he takes people’s problems as his own personal problems.

Before Prince Shittu, there have been so many presidents in ANLCA and after him many will still come onboard,  as a member of ANLCA what can you say Shittu made  the difference from other past presidents of ANLCA.

Like I told you, I have been in ANLCA for close to three  decades,  I have work with  Kamba,  the only person I was not privilege to work with then was Alhaji Rafiu Ladipo,  I work with  Elochukwu, I have  work with Inua  Muhammed,  I have work with a lot of presidents. Even before coming to national office, I was a chapter PRO, Financial  Secretary and Secretary at different times. During Elochukwu time I was Tincan Island chapter  PRO
so I have had opportunity to work with him,  he also have the quality of an exemplary leader, but I don’t have the opportunity to romance him this much as I am doing with Shittu now.  Elochukwu  was then in Port Harcourt, but anytime he’s in Lagos we   always interact , he  is very articulate and brilliant leader too. I work with Inua Muhammed briefly, even when Alhaji Sanni Shittu was the Acting Chairman, we were together, then I was Financial Secretary  in acting capacity. So I know most of these people, but for Prince Shittu, I won’t want to use  an ambiguous language,  he is not just an ordinary person , is a man that  if given the privilege to eulogies him, I can go more than 60 pages and will still not be enough.
Aside the fact that I serve with him as an Assistant National Secretary then  today I also work with  him in his company. Let me  give you this insight,  my License as a Customs Clearing Agent is about 18 to 20years old now,  I have my current license,  have been maintaining it and still I work with him.  That’s why I said as a teacher,  you also put yourself under a teacher.
I run my company and I also work for his company. If you look at my Card you see Skelas as senior manager and my company Debola ventures, as the  CEO.
Most of the time, we don’t celebrate our leaders when they are alive,  am happy that we want to celebrate this man when he’s alive. I’m closer to him even to his immediate family,  we more or less a personal friends.  I can boldly tell you that after my immediate family, Shittu is the next person. He is a wonderful person.

What can you say he achieved for the association in his 8years in office?

Like I told you you, I was involve and if you are involved you can be able to say how it went.  For instance, when we were at Kariko building, I know what happened to us when we could not pay the rent,  all our properties where thrown out in the open to be beaten by sun and rain, but when we took over there was a promise he made then that before our first tenure elapse he is going to provide a functional  Secretariat. That was the language he used then. You need to see how we came in, we were with nothing ,not even hand over notes,  but that very week he got us an office were we resumed into, the furniture and all other things used in the office was between Shittu and God . He was the only one who knows about the financing.  After that he said he wants us to have a legacy which is where we were now. If an association that has been in existence for over 50years without a place of their own and someone came in to provide that gigantic edifice, I think it’s worth celebrating.  You know there is no perfect human being even if you build houses for everyone in this Lagos, we will still have people that will talk bad about you,  but those of us who really know where we are coming from and believe in him alongside his principles, we really cherish him.
I told somebody that if not for the fact that we don’t want to use a language that people say why are you using it,  I would have say that I adore him, because you need to move closer to Shittu to get what am saying and once you move closer to him you become his family.  He will first of all consider you even before his immediate family,  he will always want to put smile on your face. That singuler achievement is more than enough. What he promised was functional secretariat, but he ended up with permanent secretariat.
Most of us who are with him knows that some of us contributed  little to this success,  if we are to score him we will give him more than  80% and the rest goes to all of us.  So we thank God for his life. 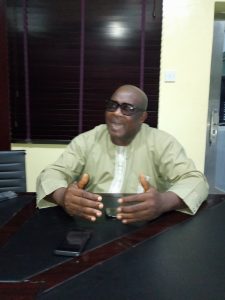 What’s your personal advice as ANLCA member to the new  president,  so that they will continue or even do better than Shuttu,

The point is everybody  has  their own style of leadership,  like I told you Shittu system of leadership  is listening to immediate  people around him. There are times  you may say something stupid, he will also encourage  you on your stupidity instead of casting unnecessary aspersions on you. He will then explain to you this is the reason why this thing is like this and within you,  you will have realized that you have made a mistake and quickly take to corrections. Only few people can adopt sure style.  I am not condemning people that are there now,  they have their style, but at least he made it known to many  that after the end of his tenure he is going to give  himself at least six months sabastical,  he is not going to talk about ANLCA and what most people don’t know  is that before Shittu will come up with anything he must have seat and give it a proper thought and planning and weigh the implications.
The essence of his not saying anything is to give the incoming executive   the Opportunity to establish their own system. If we look at it, by 14/15 it will be six months he left office. In an organization, when you have election definitely some people will be aggrieved and if you look at the election per say,  it was keenly contested apart from the fact that I work with Shittu I was the secretary of the electoral committee . We conducted the election and we know what is involved. The difference between the winner and his opponent was  just 3 votes, so there is suppose to be a win win huge  and encourage other people to come together.
But like I said everyone has their leadership style and you can’t force anyone to take your style. One thing is obvious,  Shittu has created  that platform,  he has elevated us to certain level, it is now left for people to build on that level and  surpass it, because any attempt to go below it, question will be asked.
The new people are not doing badly of course you know if you come into a terrain newly,  expectations are normally high  especially if you step into the seize of shoes that Shittu left behind . If care is not taking there will be a lot of vacuum,  in an attempt to fill the vacuum people may be looking at certain shots coming, but am sure they will find their feet.

Shittu is a Father to all -Prince Bakare