Q Tell us some of the things you have done since you resume as the Chairman of this chapter?

As the Chairman of this chapter, during my campaign I promised them that if elected into office  I will make sure the dues meant for the National Secretariat which have not been paid before will be paid, of which we   have been  paying.  Interns of health, we have been able to introduce Life Insurance Policy for all our members who are so willing with the premiums fully paid by the chapter. By the end of this year some will get their certificates,  it is the first time in this chapter that such a thing is happening.
We have put in place welfare packages for our elders who have served before we came. We have been able to put  in place the secretariat to the taste of what you are  seeing on ground now. We run on generator 24/7 which  is made  possible through the support of the other people we work with and most times from my personal pocket.
I have been  able to empower people to work, the only person that will not be able to work with me are those who are lazy and not ready to move.
Above all, we have been able to maintain relatively a peaceful environment in this chapter.

Q Any challenges encountered since you took over as the Chairman?

Definitely there must be challenges , no where one will not encounter challenges and based on the peculiarities of Tincan that takes care of all cargoes, vehicles,  exports,  containerized goods,  bulk cargoes,  different types of homogeneous cargoes and at the same time a lot of terminals are operating under it. So you have to be up and doing because issues will always come up,  but your ability to be able to nip it in the bud is very important.
Under my tenure, this is the second customs controller am working with and the atmosphere we work with the former one is what we are still working with the present controller.  Challenges will always come interns of operations,  interception, if you are not talking to SON today, it might be NAFDAC,Marine Police will also come with theirs,  it can even be customs enforcement, so how you are able to manage it is what matters.

Q  You just said that you admire Shittu leadership,  tell us more about him?

Let me  tell you something,  that man is highly principled,  people see me as Shittu’s boy,  when he first  became the president you know he came from Port Harcourt,  I was among the delegates as a stakeholder that meet with him to give advice on things we felt should be done. We talked and that was it.  Later I became his secret admirer, I began to look at the way he does his things,  his approach to things, the way he is  handling the affairs of the association,  his approach towards bringing honors to the body of the association from outsiders.  He has been able to take this association to other affiliate bodies within and outside the shores of this country. How we were able to seat together with our regulators which are the Customs body outside this country, the  World Customs Organization  (WCO).
We later got close Shittu and I.  Leadership is all about leading people and leading them aright, and when it is time to leave you do that honorably to the next capable hand. He’s been able to encourage us to empower others. Even when I was contesting for this seat, I took drinks to him and for the fact that he has taken drink from my opponent he sent me back,  that is to show how principled he is. He is not triberlised.

Q With all these, how would you now described the man Shittu?

Prince Olayiwola Shittu is an Enigma, a father per excellence , a good friend,  an upright and very brilliant person. A scholar to depend on when it comes to advise . That is  why  he was able to have a successful 8 years tenure as the   National  President of our great association, ANLCA.

Within his eight years as ANLCA President where we did not deem it fit, Shittu has taken us there. He has been able to give us a befitting national secretariat that is ours  and not rented.  Prince Shittu has been able to earn us enough respect,  he has professionalized these customs brokers profession,  he has taken us to affiliate associations all over the world. We  now belong to so many associations. He made us to know that these association is global and he has open our eyes to so many things beyond the shores of this country.
His reign was peaceful, he is a bridge builder being able to bring us together from East, West, North and South, that’s why we have our northern chapters being inaugurated.  Shittu have stayed in the East more.  When he goes to the East he’s at home and when he’s in the  west he’s equally at home.  People are free to their opinions, but as far as am concerned in the history of ANLCA, Shittu’s name can never be withered off with a wave of the  hand. 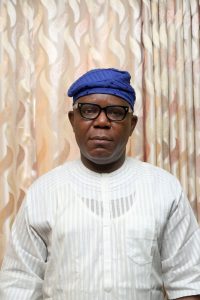 Q  On a lighter mood,  as a leader,  father and family man how do you relax?

You can only find me relaxing while reading newspapers,  historic books and current affairs materials, which is basically on Sunday’s,
since no one is at home, all the children are no longer around.

Our Server, Network Is 99% Active In Nigeria – Webb Fontaine