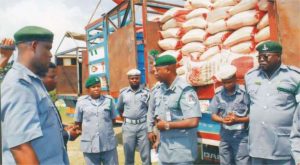 While displaying the seized items to journalists yesterday, the customs area controller of the command, Comptroller Mohammed Uba Garba, said the command also seized 21 exotic vehicles worth N135million between September and November 2018.

According to him, 57 packs of Tramadol worth N11 million, 40 pieces of used textiles valued at N774,270 and 115 cartons of imported frozen poultry products worth 728,654 were also seized.

He said, “During this two months, our resolute determination to succeed resulted in an impressive revenue generation of N1.9 billion realised for the period under review. Similarly, the uncompromising stance of the enforcement unit led to the seizure of 850 items with a duty paid value (DPV) of (378 million.”

Narrating the seizures, the customs boss said the bags of rice seized were equivalent to 27 trailers and worth N302.4 million.

However , Mohammed said seven suspects who were connected to the act were arrested and in various stages of investigations and conviction.