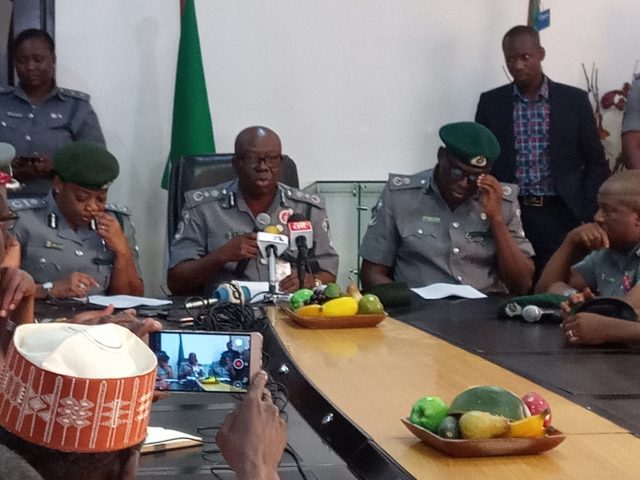 The Comptroller General of Customs, Hameed Ali, who briefed the media  after taking them round the seizure maintained that 10 pieces of 20 feet containers were predominantly imported from India.

The CG who was represented at the briefing by Deputy Comptroller General of Customs (DCG) in charge of Enforcement, Intelligence and Investigations, Augustine Chidi added that two containers of used clothings and one other of harmful bleaching ingredients were also seized.

“The Tin Can Island Command has re-jigged its operational methodology to deal with the trend and with the renewed vigour has yielded positive results positive results particularly in dealing with issues of under payment, under valuation, value transfer, concealment, falsification of documents among others.

Speaking further, Alli said the seizures were in line with the provisions of the Customs and Excise Management Act (CEMA) CAP C45 LFN 2004, Sections 46 and 161.

“In the same vein, a container of soap suspected to contain harmful bleaching ingredients and two containers of second hand clothings were seized in line with the provisions of CEMA.

In line with the presidential directive on the ease of doing business at the ports, the Comptroller General called on relevant security agencies to continually work for the overall interest of the country, in achieving 48hours cargo clearance timeline .

He also warned that the service will apply very strict sanction on any act capable of jeopardizing the efforts of the service as achieving better efficiency in the discharge of its mandate.