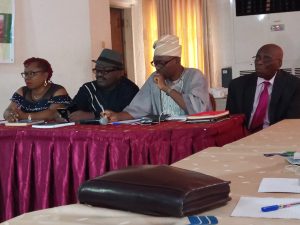 Journalists in the maritime industry have been tasked to report  beyond “He said ” but to explore enormous  areas of our maritime sector  to bring  to the fore the untapped  potentials  of the sector.
Operators in the Nigeria  maritime  sub sector  were also  called upon to synergised  for a one stop  clearing  system  to reduce delays in our port system.
The Chairman Ports Council (PCC) Chief Kunle Folarin said this during a training program  for maritime  journalists in Lagos  yesterday. He also urged all government agencies to collaborate toward estsblishing a Single Widow for port operations to reduce the time of doing business in Nigerian ports.
The one-day training programme was organised by the Maritime Industry Advocacy Initiative (MIAI) in collaboration with the Nigerian Ports Authority (NPA) on Monday in Lagos.
According to Folarin , the establishment of the single window will enable 48-hour cargo clearance to be accomplished in Nigerian ports. 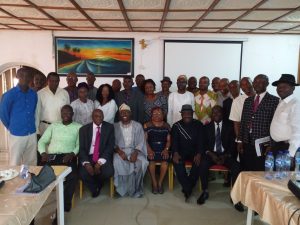 He said that there was the need to reform virtually all the laws governing the operations of the government agencies  at the ports to make 48-hour cargo clearance achievable.
According  to him “Effective Single Window operations will remove face-to-face human contacts which encouraged corruption in the system.
“Government should appoint competent people on the board of the maritime agencies so that the transformation will be achievable in time.
“All the conflicts in the enabling laws of government agencies should be removed and there should be a national objective among them to enable the Nigerian maritime sector to move forward, ” Folarin said.
He  also expressed concern about lack of synergy among all the government agencies working at the ports saying all the government  agencies  should  be reformed,  restructured and repositioned if our maritime  sector must work. He said must of the laws  governing  the maritime  agencies  in Nigeria  are obsolete and that is why the system  is not working  and the political will to do so by the government  is also lacking.
A former General Manager, Lagos Traffic Radio, Mr Layinka Adagun who was the chairman  of the  event  called on Maritime journalists to brainstorm to enable them overcome all the neglected areas in the maritime industry to make Nigerian ports the preffered destination of cargo in West and Central Africa region.
According to him, some of the vibrant members of the various maritime beats association can form an advocacy group to brainstorm in order to cover all the neglected areas and enable Nigerians to tap all the potential in the industry.
Mr Adagun said “When members of the various beat associations decide to go beyond reporting of events in the industry, they will realise that they have the resources required to constitute themselves into  consultancy groups.
“The strategic importance of the Nigerian Maritime sector to the growth and stability of the nation’s economy is attested to by its value in the upstream sector of the oil industry .
“According to the ministry of transportation , with a total annual freight cost estimate of about eight billion dollars , the maritime component of the Nigerian Oil and Gas industry reflects the prominence of the nation’s overall economy,” Adagun said.
He emphasised the need for the maritime media to highlight various areas in the operations of the sector that could further unlock its potential in contributing to Nigerian economic rebirth.
Also a Maritime Public Relations Expert, Ms Ego Nwokocha, said that the media had a huge role to play in nation- building.Nwokocha urged the media to engage  in developmental journalism.
She advised journalists to ensure integrity and accountability in discharging their duties.
She, however, said that the advent of the new media was a challenge due to the  false news being desseminated  by them.
In his contributions the Chairman, Lagos Council of the Nigeria Union of Journalists (NUJ), Dr Kazeem Akinreti, urged journalists to build up their integrity and look beyond the maritime industry in their reportage.
Akinreti said that the union was working toward establishing Badagry Radio to attract maritime potentials in the area.
According to him, Badagry has peculiar resources concerning roads, rail, water and air because from Badagry waterways one can connect to Northern parts of the country.
On controversy over NUJ Abaren land, he said that the union had concluded plan to allocate the plots of land to its owners before the end of 2018.