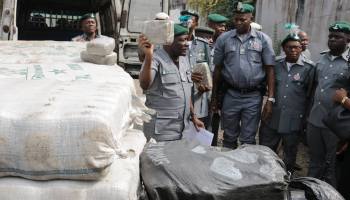 In its continuous fight against smuggling activities at the border line , Officers and men of  Nigeria Customs Service, Seme  border  command has seized a total of 6, 753 bags of 50kg foreign parboiled rice equivalent to over 11 trucks of rice with combine Duty Paid Value (DPV) and levy totaling one hundred and fifty-seven million, four hundred and seventy-nine thousand, nine hundred and sixty Naira (N157, 479, 960) in more than one month.

This figure was made known yesterday by the Seme Customs Area Controller ,Comptroller Uba Garba Mohammed, while briefing news men on the activities of the command in the last one months.

Comptroller Garba  disclosed that a total of 91 parcels of hard drugs and narcotics where seized which according to him  had been successfully handed over to the National Drug Law Enforcement Agency (NDLEA).

Also, a total of twenty-two (22) fairly used vehicles and means of conveyance have been seized within the period under review.

The combined Duty Paid Value (DPV) for the vehicles stood at one hundred and seventy-seven million, three hundred and fourteen thousand, ninety-one Naira (177, 314,091).

Mohammed disclosed that one of the suspects, Difo Kenneth Cornelius who was transferred to the NDLEA Seme command in August 2018 had been prosecuted successfully and was sentenced for a term of two years on the 30th November, 2018 for unlawful possession of 7kg of Cannabis Sativa.

He observed that the unwavering resolve of the officers and men of the command in various operations which focused on maximizing revenue collection, suppression of smuggling and facilitation of legitimate trade was proficiently enforced across the Lagos-Abidjan corridor in the final month of 2018.

“As a result, in the month of December 2018, the command generated the sum of six hundred and twenty-three million, twenty-eight thousand, four hundred and forty-two Naira, sixty-eight Kobo only (N623, 028, 442.68). Similarly, the intensified operation of the Enforcement unit has drastically reduced smuggling activities to the barest minimum”, he said.

He however put the grand total for both seizures and revenue generated within the period under review to one billion, fifty-five million, one hundred and twenty-two thousand, five hundred and thirty-nine Naira, sixty-eight Kobo.

The CAC pointed out that with the inauguration and subsequent movement of the command to the Joint Border Post (JBP) of Seme-Krake, the operations of the command would be further enhanced through cooperation, collaboration and regional integration by facilitating the free movement of persons and services, reduction of trade and logistics cost, increasing inter-regional trade, increase in government revenue by eliminating trade barriers, reduction of delays, operating costs and availability of baseline data for impact assessment.

This he said was to assure the customs management that this year’s revenue target allocated to it would not only be met but would be surpassed provided that other factors remained constant while assuring that the command would further strengthen its anti-smuggling operations against trans-border crimes through intelligence driven operations and continuous partnerships with other relevant agencies for effective border management to stem the unlawful activities of dare devil criminals.