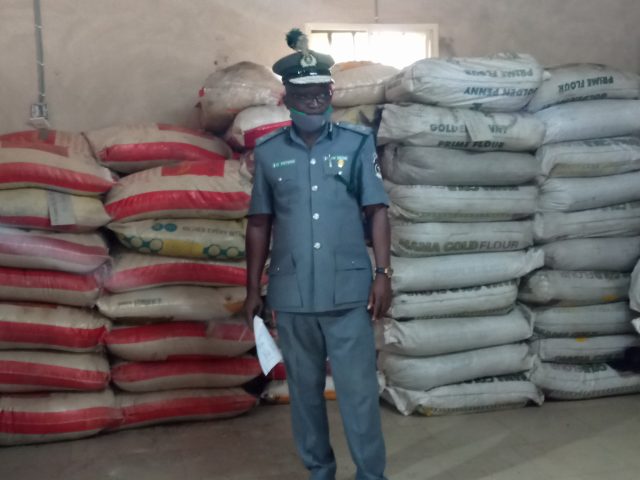 The Controller General of Customs (CGC), Col. Hameed Ali (rtd)  has recognized the outstanding performance of officers and men of Western Marine Command who were involved in the seizures of 10 tonnes of cannabis sativa known as marijuana earlier in the year.

These gallant officers were given commendation letters for their noteworthy performance by the CGC and his management team.

The command Area Controller, Comptroller Peters made this known to news men at the commands headquarter on Friday.
Comptroller Peters hinted that the acts exhibited by the officers shows a demonstration of zero tolerance to corruption and other vices in line with policy thrust of the Hameed Ali administration.

He said that the commendations would serve as a morale booster to the officers involved and also as an encouragement to other officers and men of the Western Marine Command.

Recall that the Commands operatives of the Coastal and Harbour Patrol has on the 21St of April 2020 arrested and seized over 10 Tonnes of Cannabis Sativa (Marijuana) valued at over 1.02 Billion Naira based on intelligence report.

The seizures which  happens to be the biggest of a single item of Cannabis Sativa ever seized in the history of Nigeria Customs Service on high sea was destroyed by burning on the 26th June 2020 at Falola Beach in Badagry West Local Government Area of Lagos State and witnessed by other sister agencies, chairman of Badagry West LGA, traditional rulers among other’s.

The Command boss disclosed further that this great feat has also earn the Command an international recognition. “It is worthy of note to mention here that the United Nations Office on Drugs and Crime has recognized the WMC and they are about to install a Video Teleconferencing (VTC) (Cisco Webex) equipment that will aid our operations in the maritime industry. “The equipment is to strengthen inter agency cooperation between the Nigerian Customs Service and other maritime law enforcement agencies in the fight against piracy and other maritime crimes in Nigeria.
“Against the rising threat of maritime piracy, they provide a veritable platform to ensure effective collaboration between the Customs Service and other maritime law enforcement agencies in the implementation of the Harmonised Standard Operating Procedures on Arrest, Detained  and Prosecution of Persons and Vessels in Nigeria’s Maritime Environment (HSOP-AD&P), the addendum on evidence to the HSOP-AD&P as well as provide for remote witness testimony in the prosecution of maritime cases.

“The equipment is funded under the auspices of the Government of Denmark project aimed at strengthening maritime law enforcement response to piracy and other maritime crimes in the gulf of Guinea” he quipped.

In the area of anti-smuggling, Comptroller Peters hinted that the Command made seizures of various items with a total DPV of N18,893,545.00 between the period of July through September 2020.

The seized items were listed to include  1,033 bags of Foreign parboiled rice of 50kg each, 24 kegs of Vegetable Oil of 25liters each, 26 cartoons of new women slippers and 331 kegs of 25liters PMS.

Others are 100 pairs of worn shoes, 52 kegs of  organic Fertilizer of 5 liters each with 36 by 250ml each and also some numbers of beauty products.

Peters added that the seizures were made at various outstations of Ere, Badagry, Ojo and Idiriko area respectively.
He however appreciate the CGC, his management team and members of the fourth estate realm for their continuous support.
“Let me on behalf of the entire Officers /Men of the WMC extend our appreciation to the CGC and the entire management for recognizing our efforts and assure them that the Officers/Men under my watch are combat ready to make the western waterways “a no go area” for smugglers.
“My appreciation would be incomplete without appreciating the Gentlemen of the press for your determination in disseminating the efforts of the WMC in anti-smuggling drive” he said