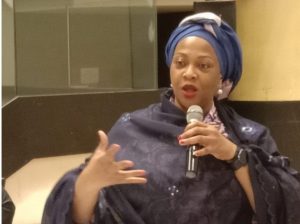 The honourable Minister for state on transportation, Senator Gbemisola Saraki has disclosed that the Cabotage Vessel Finance Fund (CVFF) is still intact for disbursement.

Honourable Gbemisola Saraki made this known on Friday in Lagos, at the Eko hotel and suites Victoria Island during an interactive session with members of the maritime medias in rounding off her one week tour of the ports in Lagos.

She hinted that the fund which is to the tune of three Hundred and Fifty Million Dollars will be disbursed as soon as possible,

It could be recalled that the CVFF was created in 2003 under the Coastal and Inland Shipping Act 2003, and it’s a pool of funds derived from two per cent of every contract awarded under the Cabotage regime, which covers shipping activities within the inland and coastal areas of the country and was designed to enable indigenous shipping lines to acquire vessels to enable them compete with their foreign counterparts.

The honourable Minister who disclosed that contrary to speculations in some quarters that the said fund may have been misappropriated, which could be the reason why it was yet to be disbursed after several years of selection, pre-qualification and shortlisting of eligible beneficiaries with none yet to access the revolving loan facility years after, says the fund is still intact and will be disbursed to the already shortlisted beneficiaries once the formulated guidelines for disbursement is presented to the National Assembly for approval.

Speaking on the Lekki deep sea port, honourable Saraki hinted that president Buhari has given his nod in the area of multimodal means of evacuating cargoes, she stated that the ports in Lagos shall be fixed, while considering the due process to carry it out due to the distruptive nature of the project.

Responding to question concerning the Fifty Billion Naira floating dock, she stated that modalities are being put in place to put the idle dock in use.

On the issue of membership of the International Maritime Organisation category C, Saraki said that the government is going back to the drawing board in order to really address the reasons behind the constant failure to win a place in the category rather than rushing back into contesting to get into it hastily and then failing again.

She added that it is paramount for her to urged everyone in the sector to put his or her house in order so that the so much talked about potentials in job and wealth creation will be realized.

The honourable minister also said in an interview that her one week tour of Lagos ports and other facilities is just the beginning and an attempt to forge better relationship with businesses. “This visit is an attempt to see how best government can make businesses ready for the African Continental Free Trade Area (AfCFTA)” she added.

She said her worries is that a lot of seafaring businesses have gone under and there is need to see how the trained personnel can be re-engaged as there are so many ways to engage them in the sector.