Jean Chiazor and Partners (OFIANYI CHAMBERS) has come out atop the list of Woza Africa Women in Law Awards for the year 2022.

The award titled “WOZA AFRICA AWARD 2022” Women in Law, Best in Marine & Environmental has its first runner up presented to Mrs Anishere while the Best African Law Firm Women Lawyers or Less has her chambers, Jean Chiazor and Partners (OFIANYI CHAMBERS)  as the winner.

The WOZA Africa Women in Law awards was launched in 2019 by Rehana Khan Parker and Asha Singhania and it’s aimed at recognising the outstanding dedication, achievements, and contributions made by women lawyers to the legal profession. 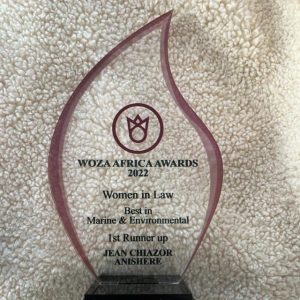 According to the letter sent to the Senior Advocate by the WOZA award team, it states “Your law firm was nominated and has in fact placed in the top 3 in the category – (Africa) 5 Woman Lawyers or Less.

“The WOZA Awards – the only stand-alone awards platform recognizing the achievements of women in the legal profession in both South Africa and the continent – have returned after a two-year hiatus.

‘While the COVID-19 pandemic dealt a blow to the continuation of the awards, the appetite for this platform has not dissipated. The 2022 edition of the awards continue with founder Rehana Khan Parker, joined by Subashnee Moodley and Laura Morwesi Dlepu. 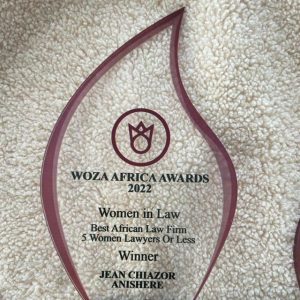 “The 2022 Woza Africa Awards gala event is due to take place on 30 July 2022 at Emperor’s Palace. The red carpet and media session is due to commence at 17:00 in the South Wing of the Emperor’s Palace convention centre” it reads.

It could be recalled that Mrs Jean Anishere recently bagged the PROGRESSIVE LEADERSHIP AWARD at the 2022 Pan African Women Economic Summit award in Tanzania.

She was nominated for the honor in recognition of her outstanding performance, commitment and positive impact as it has to do with her exceptional leadership in changing the narratives and perception within her organization and the Continent at large.