Candidate of the Action Alliance (AA) for Rivers State House of Assembly Khana Constituency 1, Hon. Wilson Barinua Uebekee has stated that lack of human capacity development opportunities for youths in Khana, especially those of his constituency is undermining their potential, stressing that there is an urgent need to change the situation and restore the people’s hope.

Uebekee disclosed this in a telephone chat with our correspondent in Lagos on Friday.

He said that his main reasons for seeking election into Rivers State House of Assembly are to ensure that opportunities are created for youths in his constituency to actualise their dreams and for education to be given priority in the state.

He stressed that the youths of Khana are highly intelligent, creative and hard-working but live in an environment with limited opportunities that does not allow them to showcase their ability. He commended the youths for not relenting in making efforts to improve their lives despite getting little or no attention from government.

He decried a situation where youths are only used for political thuggery and violence and abandoned after elections.

He regretted that youths with great potential are wasting away because government policies do not capture their interest.

The vision-driven politician, described as unfortunate the scenario where youths are neglected and only noticed when they pick up arms and become threats to themselves and the state.

According to him,”such a situation could have been avoided if government were proactive and ensured that youths are engaged in meaningful activities.

Uebekee said, since the return of democracy in Nigeria in 1999, the political system has been stiffened to shut out youths with fresh ideas.

He said this situation has not allowed youths to realise their potential in society.

In his words ” A typical Khana person is hardworking, brainy and creative but we live in an environment where people with strength and ideas that ought to drive the economy and political process are relegated to the periphery or shut out”.

“It is tear-jerking to watch youths with great potential waste away because they are not captured in government policies. Keeping the youths idle, who ought to be active in the state workforce, driving industries and businesses or studying in schools is a disservice not only to these youths but to the state at large. Youths are not meant for thuggery and political rallies, they are the most important assets of the state. To neglect them is to prevent the growth of the state”.

He added that any government that neglects the masses losses its legitimacy.

He, therefore, called on youths in particular and the people of Khana constituency 1 in general not to be passive but active participants in the decision process of who would represent them, promising that if elected into office, his main focus would be youth empowerment, and to ensure that students are given the legal framework to have access to loan and grants in order to actualise their dreams as well as sports and entertainment development initiatives to bring about prosperity and promotion of peace among youths of his constituency.

He lamented the sorry state of Primary and secondary schools in Khana Constituency 1 and promised that if elected, he would ensure that government takes active steps to change the ugly scenes and boost education in the constituency. 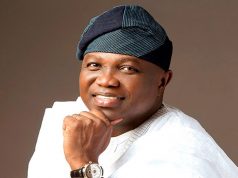