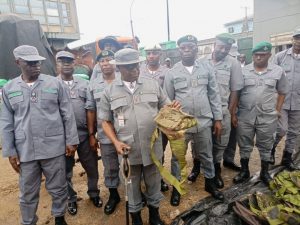 Operatives of Federal Operations Unit Zone ‘A’ of the Nigeria Customs Service has recorded seizures of various items illegally brought into the country in the month of August 2022.

Addressing newsmen at the Unit headquarters in Ikeja , Lagos the Acting Controller of the Unit, Hussein K. Ejibunu disclosed that the Unit adoption of constantly reworked strategies in handling their obligations provides them the edge over the saboutuers and their game of concealment, false declaration and under payment of duties. 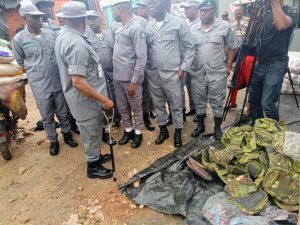 The most critical item among the seizures is 20 drums of Carbide, a chemical material used in the manufacturing of improvised explosives devices simply known as IEDs.

The anti-smuggling Czar said ” This chemical when in contact with other chemicals, water or moisture becomes reactive and could cause serious damage and it also causes some health challenges. Importation of this particular material as with others of such nature is strictly controlled by the office of the national security adviser and therefore requires an end user certificate when imported, but notably, the certificate has not been procured in this case”. 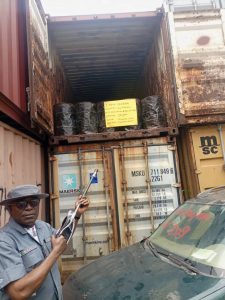 He added that the sum of Fourty-six Million, Two Hundred and Ninety-eight Thousand, Four Hundred and Twenty-two Naira, Fifty Kobo (N46,298,422.50) was recovered from undervalued and under declared goods.

Appreciating the CGC, Col. Hammed Ibrahim Ali (Rtd), his men and all those who make his job easier by way of credible information and cooperation he hinted that smuggled items violate the provisions of the Customs and Excise Management Act (CEMA) CAP C45 LFN 2004.

He however retreiate the unit obligation to continually make life unbearable for smugglers and any act of economic sabotage.