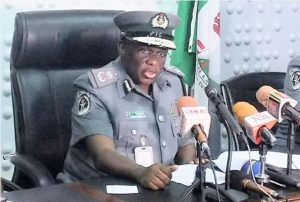 The Apapa Area Command of Nigeria Customs Service said it has recorded the sum of Seven hundred and ninety billion, Six hundred and thirty million, Four hundred and six thousand, Nine hundred and eighty naira, ninety-six kobo (N790,630,406,980.96) revenue between the period of January to September 2022.

This amount generated shows an exponential improvement of N181.5 billion as against N609 billion naira collected in the corresponding months of the year 2021.

Speaking to News men on Thursday at the command , the Customs Area Controller incharge of the Command, Comptroller Ibrahim Yusuf Malanta disclosed that the recorded figure represents 29.89% increment.

Attributing the feat to the relentless effort of his officers and men, Controller Yusuf said “This remarkable achievement was made possible because of our officers tireless commitment to ensure that all revenue leakages are being mitigated, as well as sustaining the level of compliance by the importers/stakeholders the clearance value chain”.

In the area of anti-smuggling activities, the Command boss hinted that it has been one of the command’s focal points, especially with the activities of some unrepentant traders who are always looking for avenues to undermine the system.

He added that the command has fortified its forensic manifest management to monitor and detect fraudulent transaction through audit trial to ensure that illicit trade are being tracked before the declarations are lodged.

“For the period under review, the command recorded one hundred and forty-five seizures of various items with a duty paid value (DPV) of Twelve billion, four hundred and ninety-six million, six hundred and seventy-two thousand, one hundred and twenty-two naira (N12,496,672, 122.00)

“These importations are in clear breach of sections 46 and 47 of Customs and Excise Management Act, CEMA CAP C45 LFN 2004”. He quipped.

He however hinted that the Command is
continuously ready to assist in facilitating legitimate trade and ensuring that all forms of smuggling activities through false declaration on import/export done in defiance to extant trade guidelines will be detected through layers of control mechanism.