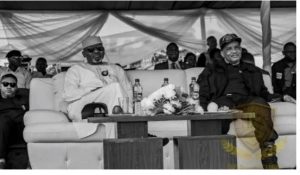 …Advice Cadets To Be Of Good Conduct

The Director General of Nigerian Maritime Administration and Safety Agency (NIMASA), Dr Bashir Jamoh has hinted that about 2,041 students have been enrolled in the National Seafarers Development Programme (NSDP) since the inception about 12 years ago.

He added that 892 of that number are now licensed deck and engine officers including naval Architects, while the rest are in their final stage of the programme.

Dr Bashir Jamoh made this known on Saturday in Lagos at the flag off ceremony of the Batch B of the 3rd phase of the National Seafarers Development Programme (NSDP).

He added that about 486 of the graduates are now gainfully employed and sailing in both coastal and ocean going vessels.

He hinted that the agency in fulfilling one of its core functions in the area of maritime capacity building in 2008 initiated the NSDP with the mandate of training Nigerian youths to become seafarers and Naval Architects..

He added that the programme was designed to train Nigerian youths up to Degree level in Marine Engineering, Nautical Sciences and Naval Architecture in some of the best Maritime Training Institutions (MTIs) abroad and to position them to compete effectively in the global Maritime Industry.

He added that it was at some point, it was said that Nigeria had less than ten Seafarers on ocean going vessels, while countries like the Philippines had over Four hundred thousand (400,000), and currently earn over Six billion U.S dollars ($6,000,000,000.00) in forex inflow from their seafarers employed around the world. Countries like India, Indonesia and China also have their nationals all around the world working in the maritime industries. “It is hoped that with continuous progress made and better projections in the NSDP, Nigeria will soon be among the major players in the global maritime sector.” he said

He stated further that NIMASA and the Federal Ministry of Transportation (FMOT) is satisfied with the above success and the need to drive the policy of the Federal Government on youths empowerment to a laudable height approved the expansion of the programme by 435 new intakes (christened NSDP TERRA).

In his word “While implementing this, we took into account the encumbrances encountered in the operations of the programme in the last 12 years and ways of eliminating or minimizing them, which he stated to include: (A) Consideration of a recruitment plan that selects the best candidates into the NSDP
B) Spreading beneficiaries across the six geopolitical zones of Nigeria,
C) Introducing a conduct of conduct for all beneficiaries enrolled into the programme to safeguard the image of the country.
D) Selection of Maritime Training Institutions (MTIs) that offers the three training elements of the programme (shore-based training, shipboard training and the certificate of competency), this is to eliminate the long delay in securing sea time training berths that was experienced with the previous set of students.

In addition, NIMASA comparatively got the most reasonable cost for the training and in countries of mutual recognition of CoC with Nigeria.

The agency boss disclosed further that in the meantime the agency has recruited 400 new students into the programme and secured admission in two reputable MTIs in Greece and India.

On the prospect of the programme, he disclosed that the past decade has witnessed an increase in the global trading fleet, partly on account of developments in Asia and other emerging opportunities. In Nigeria, the demand for seafarers has also increased on account of the Cabotage regime which requires that vessels engaged in commercial trade and operations in the coastal and inland waters in Nigeria should be manned by Nigerians. Also, the expanding opportunities provided by the Liquefied Natural Gas projects have also been a major boost for manpower demand of the sector. With prospects for the commencement of operations of the Brass LNG, the expansion of the NLNG trains and the Olokola Gas project, manpower demand for that sector has doubled the existing number.

He added that another prospect is the growing off-shore oil exploration and production activities, which have increased the vessel requirements to meet demand in the sector.

Other areas with significant prospects include the fishing sector, the manning of inland waterway crafts and coastal tankers. “Overall, the prospects for the future of the Nigerian shipping industry remain very bright in spite of the manpower constraints. It is our hope that the NSDP scheme will in the long run increase the pool of Nigerian seafarers for export to other countries,” Jamoh said.