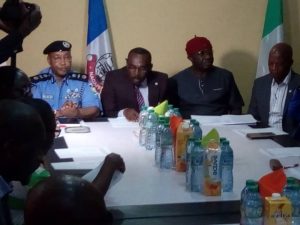 The Assistant Inspector General of Police in charge of the Marine Command, Alkali Baba Usman .has said that  police would continue to stop containers on the road as  many issues which includes hacking, under-declaration, forgery of documents form the basis for the action.

According to him, 146 cases are presently under investigation  for offences that have to do with such infractions and non compliance with government policies.

The AIG who made the call recently  during a working visit to the National Association of Government Approved Freight Forwarders (NAGAFF) in Lagos made it known that three officers and men of the command were arrested and detained over the weekend for illegal activities. Admitting that there are bad eggs in the force, he said it was obtainable in all sectors of the society.

Mr Alkali also  harps on the need for armed personnel to board and escort vessels at berth and anchorage in a bid to curb incessant attacks on ships within the nation’s seaports.

With available patrol boats, the presence of security personnel will be felt in protecting vessels any time they are at berth until they finish discharging their consignments, he said.

He lamented the inability of the regular marine police to provide adequate security for ships at berths as a result of insufficient logistics. He regretted that frequent altercation with the Nigerian Navy (NN) at sea, also hinders the command’s efforts in providing armed guards to the ships at berths.

The International Maritime Bureau, in its monthly report for May 2018, stated that out of a total of 45 attacks on ships globally, 22 took place within the Nigerian territorial waters.

Recall that the Federal Government said that it was illegal and unconstitutional for private security guards to carry arms on board merchant vessels operating within the nation’s territorial waters.

NAGAFF had earlier raised the issue of challenges the overlapping functions among government agencies in the port created for her members.

According to NAGAFF president, Chief Increase Uche, the agencies abuse general duty powers by using unauthorized police operatives within and outside the ports. “Aside this, we have the issues of unchecked harassment and violation of the rights of our members by the various agencies of the government at ports.

The non-enforcement of regulations, the resistance to change by port users, the high handedness of terminal operators and shipping companies, the deplorable state of the ports access roads and the widespread corruption in the system, he stated, are issues for concern.

He, however, commended the police boss for proactive action on resolving the rampant issuance of letters to shipping companies, terminal operators and other government agencies to block containers from being released.