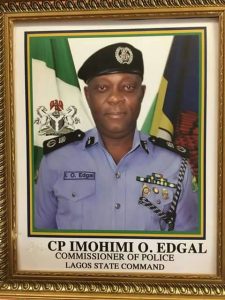 The Lagos Police Command has dismissed three Police Officers for teargassing one Temitope Solomon, which led to his asthmatic health condition. 92 other officers also faces several disciplinary actions.
This was contained in a Press Statement signed by
SP Chike Oti,,
Police Public Relations Officer,
Lagos State Police Command.
According to the release a total of 95 Officers have been sanction for various offences.

The Statement reads “In keeping with its promise to regularly update Lagosians about the activities of the Command, the Lagos State Police Command, wishes to inform members of the public that the Commissioner of Police, CP Imohimi Edgal has dismissed the three police men, comprising of an Inspector and two Sergeants, who were alleged to have sprayed tear-gas on Mr. Ademuwagun Temitope Solomon which provoked severe asthmatic crisis in him.

“The incident took place at Chinese Town, Ojota area of Lagos state. The men whose names and service numbers are: 220957 Inspector Momoh Sulaiman, 429659 Sgt. Emmanuel Monday and
434246 Sgt. Adamu Usman, were tried in an orderly room which commenced yesterday 09/06/2018 and were found guilty as charged.

“They were therefore dismissed and de-kitted accordingly. However, the dismissal proceeding of Inspector Momoh Sulaiman has been forwarded to the Assistant Inspector General of Police, Zone 2 for approval.” the statement reads.

The Command which also release his January to June report says 2018; said
the officers were tried in a properly constituted orderly room and were found guilty of various offences against discipline which earned them appropriate punishments depending on the charges against them.
According to the report 8 Officers have been dismissed, four were reduced in ranks and 43 in major entry.
Others are three officers
SEVERE REPRIMAND, four others EXTRA FATIGUE,another four faces, WARNING NOTICE, and 28 others DISCHARGED AND ACQUITTED.
The commissioner of police was quoted as saying
“The Commissioner of Police, said that this would serve as a deterrent to other policemen wishing to toe the path of infamy, that the Nigeria Police under the watch of the Inspector General of Police, have no room for them. He warned all serving police officers to be professional at all times in the discharge of their duties and shun corrupt practices”