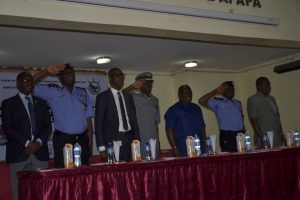 tic and urgent actions on revenue leakages in the  maritime, Oil and Gas industries so that the country will not grind to a standstill.

The advice was made by Dr. Musa Usman Abubakar, the  Acting Chairman of Independent Corrupt Practices and other Related Offences Commission (ICPC)
,at a One Day Workshop in Lagos  on Dangers of Revenue leakages to the Nigeria Economy organised by the Association of Maritime Journalists of Nigeria ( AMJON) and chaired by Hon. Akinloye Babajide, Chairman House Committee on Anti Corruption.

He pointed out that the danger associated with revenue leakages is  occasioned by corruption and stated that the agency would continue to welcome engagements to mull the malady.

The ICPC boss who was represented at the event by Akeem Lawal, Director Integration, ICPC, said that if the level of revenue leakages is allowed to continue, the economy of the country May bleed to death. Stating that  lack of accountability and transparency among other vices have led to abject poverty, inadequate infrastructural and social amenities, poor standard of living and low per capital income.

.He therefore called on all stakeholders to devise a workable strategy to find a lasting solution to money laundering by public officers.

“The activities of all the Ministries Departments  and Agencies (MDAs) in the various Ports, the Clearing Agents and other bodies that operate in the ports should be further scrutinised because all of them contributes in one way or the other to the revenue leakages.

“Some of them are known to cut corners, thereby under-paying or not paying at all the official tax or tariff which form substantial part of the leakages.”

Speaking on the efforts of the agency on the course so far, he said that in 2013, in furtherance to  it’s statutory powers  conducted Corruption Risk Assessment (CRA) in the ports sector in conjunction with a team of partners consisting TUGAR, BPP, UNDP, MACN and Shippers’ Council.

He stated that the effort culminated in the development of Standard Operational Procedures  as well as Integrity Plan even as he said that legislature will have  a role to play in the process.

Speaking earlier, Chairman House Committee on Anti Corruption ,Hon. Akinloye Babajide said the Oil and Gas and Maritime Industries have strong nexus with interwoven features that can  compliment each other in generating huge revenue for the Country, if leakages are prevented.

“As a ranking lawmaker,who has served in several committees and. following developments  in these two most critical areas of our national economy,I am convinced that Nigeria’s effort at economic diversification needs strong supports  from these sectors,if we must break through.

“In addition to vast agricultural potentials and millions of productive workforce that can be improved on our Gross Domestic Product (GDP) of $405.10billion (USD),Nigeria took over from Angola as Africa’s number one oil producer last year.

He added that the National Assembly as an institution concerned about these unpalatable statistics about a rich, but poor country at the same time.

He called on all stakeholders in the sector to rally round the government in paying their required taxes so as to aid the growth of the Country.