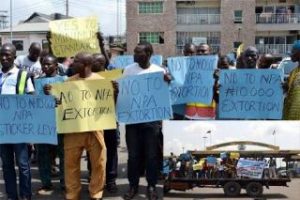 The recent strike action embarked upon by the truck drivers operating at the nation’s seaports was suspended after the Nigeria  Shippers’ Council meeting with the Nigerian Navy, the Nigerian Ports Authority and the truck owners.

The withdrawal of service by the  truck drivers  was carried out in order  to express their dissatisfaction over alleged maltreatment and extortions by Naval  Officers and other security agents assigned with the responsibility to  control traffic within the  ports access roads.
The action which generated mixed reactions among  stakeholders in the maritime sub sector have some   lauding it even as they lamented that it would have a rip off effect on their businesses. 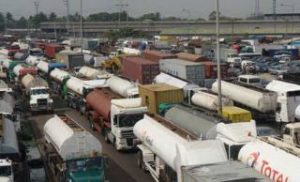 While speaking on the strike, Alhaji  Haruna Omolajomo, Executive Secretary of Association of Bonded Terminal Operators of Nigeria (ABTON) commended the truckers for the initiative saying that other industry players were supposed to be part of the show of aggression.
He however added that the action did not have negative effect on their operations saying “Bonded terminals have been operating below 3% under-utilisation.
“I commend the truckers for the strike, it is what all stakeholders are supposed to be part of.  We are in support of what they are doing. They are the only people that can hold government to ransom. The only language understood by the government is strike.

“The government should listen to them and meet their demands ,” he admonished.
Also speaking, Comrade David Pius, a freight agent and port activist said the withdrawal of service  was laudable, but maintained that clearing agents were caught unaware as they were not informed ahead of the strike.
Comrade Pius stated that the action would lead to accumulation of demurrage in the port hence terminal operators and shipping companies would smile to the banks.
“Terminal Operators and Shipping Companies will now be smiling to the banks as a result of demurrage accumulation.
“There is enough reasons for them to go on strike. They have made several attempts to reach the government over the issue but without success.
“The government should look at the Industry and salvage it from the infrastructural rots and inconsistent policies,” he admonished.

The Nigeria Customs Service (NCS) however said the strike did not affect its operations and revenue generation drive.
The Customs Public Relations Officer of the Tin Can command ,Mr.  Uche Ejesieme said that the strike action had no negative impact on the revenue collection of the Command.
Ejesieme noted that despite the strike, agents are going about their normal duty .

A Chieftain of Road Transport Employers Association of Nigeria (RTEAN) ,Tin Can Island chapel, Comrade Sylvester Keshiro lamented that the situation on ground is not palatable adding that the drivers have every right to air their grievances .
Keshinro bemoaned that security agencies deployed to man the access roads, molest arrest and extort drivers unnecessarily ,stressing the government needs to rise to the occasion.
He said truckers are demanding for the removal of naval officers along the access roads adding that the Nigerian Ports Authority must be held accountable for the strike action embarked upon by drivers.
However with the intervention of relevant  government agencies ,.the strike action was suspended.  On the other hand, Nigerian Port Authority (NPA)  has put the blame of the collapse of the call up system on terminal operators and shipping companies operating at the two major ports in Lagos.
NPA, in a press statement made available to journalists  by the Assistant General Manager, Strategic and Corporate Communication, Isah Suwaid said it consulted with the operators before embarking on the call up system.
The statement read, “In response to the protests by trucks drivers around the Lagos Port Complex and the Tin Can Island Ports, the management of the Nigerian Ports Authority has held several meetings with unions between Thursday, July 5, 2018 and Wednesday, July 11, 2018.
Some of the issues raised by the protesting drivers include the, operation of the call-up system introduced by the Authority as part of our traffic management strategy; alleged extortion by security agencies and the;l utilisation of holding bays by Shipping companies and Terminal Operators as defined in an agreement in November, 2017.”

“The Authority recalls that it consulted widely with all stakeholders including shipping lines and terminal operators before the introduction of the call-up system, which has proved to be the most effective way of managing traffic in the Apapa axis till date.”
“The current situation results from the reported failure of some of the shipping companies and terminal operators to comply with the agreement on the usage of holding bays reached in November, 2017.”
Suwaid also disclosed that it has begun investigation into allegation of bribery and compliance and non compliance level of terminal operators and shipping companies.
“We have consequently launched an investigation into the level of compliance or non-compliance to agreements reached between the Authority, Shipping Companies and Terminal Operators on the immediate use of holding bays for trucks and containers until such trucks were called into the ports through the call- up system adopted in November 2017.

“Any company found to have contravened this agreement will be sanctioned.
“As the Authority also investigates allegations of extortion by officials of the Nigerian Navy, The Nigeria Police Force and NPA security personnel by the truck drivers with assurances that culprits will be made to face the laws of the country, we appeal to stakeholders to give chance for a peaceful resolution of the issues at stake.”