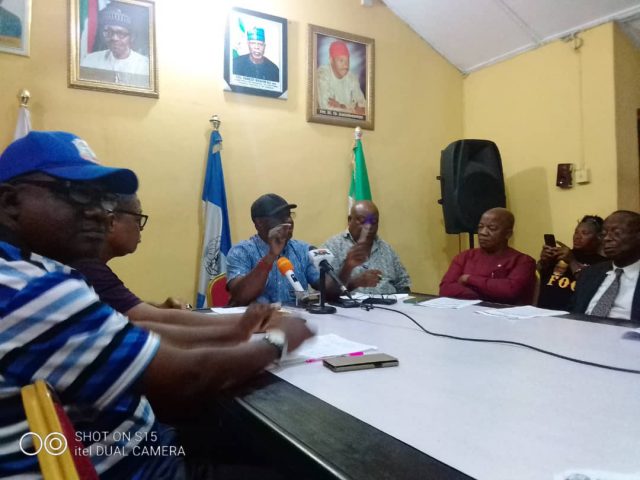 The founder of National Association of Government Approved Freight Forwards (NAGAFF) , Dr Boniface Aniebonam has said that the NAGAFF 100% compliance team should be embraced as it has come to add value to business at the port.
Dr Boniface hinted that the compliance team is not out to witch-hunt any government agency, but to complement them better in execution of their mandate and make the Nigerian ports a better place.

Aniebonam made this known on Tuesday at the association headquarters while  briefing the media on the sole purpose of setting up the 100% Compliance Team.
He hinted that the (NAGAFF) 100% Compliance Team is meant to ensure that operators in the industry comply with rules and guidelines for international trade at the seaport, airports and other entry points at all times.
By so doing, he said government agencies will be able to deliver on their mandate while ensuring that the shippers/ importers and freight forwarders imbibe the culture of doing the right thing.

Dr Aniebonam also hinted that the compliance team is not in the port to go against anyone or government agencies but rather to assist in ensuring Compliance. “As freight forwarders we have the right to protect the investment of our clients , if not we mat soon run out of job which is applicable to the government agencies.

“With the Compliance Team we will be able ri stop available seizures by Customs, they are avoidable because they are tradable goods, the law allows them to cine in but are seized dye to the non compliance to duty payments and others” he said
He added that the NAGAFF 100% Compliance Team should be seen as an ally to Customs and other quality control government agencies.” We are not enemy, so those who see us as one should stop thinking so. We are out to add value to encourage trade’
He said further that for the Compliance Team to achieve the purpose of its set-up and strike a working relationship with government agencies in the industry and also spread the message of complying with rules guidelines by the NAGAFF members and freight forwarders in general, the leadership of the 100% Compliance Team embarked on tour of Bonded Terminals.
The NAGAFF founder disclosed that the weeklong tour which went on very well in majority of the seaports and terminals visited got applaud of Customs officers on ground with the pledge of readiness to partner with members of the Compliance Team in the task of ensuring compliance which will be to the benefit of everyone and government revenue in particular.
Reacting to the alleged  issue of faceoff between NAGAFF members and Customs in one or two Bonded Terminals during  the  tour,he said that it was nothing but a misconception because the briefing received from the leadership of the Compliance Team who are at the center of the controversies states that the visit was largely successful without any serious issues pitting the team against the Nigeria Customs Service or any of its officers.
He added that the findings revealed that no member of NAGAFF ever raised any allegation of arrogance or corruption against any officers of the NCS  as portrayed in the the online report.
He hinted that no member that no member of the association was directly accused of any unruly behaviour. ” NAGAFF as an Association has always seen the NCS as an ally and will do everything within the law to ensure that the Service just like other government agencies succeed for the benefit of our great country ” he said.