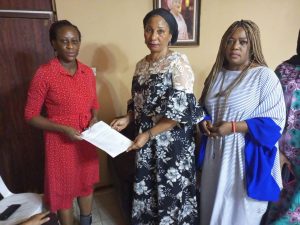 …Says He Was  One Of Her Avid, Foremost Patrons.

The Women’s International Shipping and Trading Association. (WISTA) NIigeria says the news of Otunba Kunle Folarin’s death  came as a shock to the industry and most especially to the association as no news of ill health was reported before his death.

Mrs Eunice Ezeoke “The sad news about Otunba Kunle Folarin came to us as a huge shock, because we never heard he was sick!

‘He was an erudite scholar, researcher, and repository of maritime industry knowledge and information. Otunba mentored many and freely shared his knowledge with all that cared to acquire knowledge.

‘He lived a very impactful life filled with vigor and passion for the industry he so loved. His great intellectual capacity usually demonstrated at Industry events remain unparalleled. His depth of the knowledge of the Martime Industry appeared inexhaustible. He has left a void that will be difficult to fill.

‘Never one to retire to the life of leisure and sedentary, Otunba heroically remained dynamic and active to the very end!

“WISTA Nigeria extend her deepest condolences to the lovely wife, children, grandchildren and family.
May his soul Rest In Peace Amen”. Ezeoke quipped.