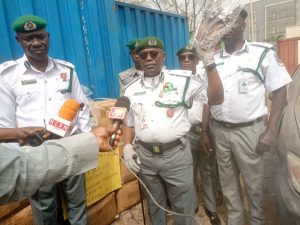 The anti-smuggle arm of Nigeria Customs Service operating in Zone A (FOU A) says the Unit made a total seizure of smuggled items worth a duty paid value of Thirteen Billion, Nine Hundred and Eight Million, Five Hundred and Seventy-five Thousand, Four Hundred and Thirty-six Naira, Five Kobo (N13,908,575,436.5) from the period of January 1 to December 31 2022.

The Unit which cut across six states of South-West in Nigeria namely: Lagos, Ogun, Oyo, Osun, Ekiti and Ondo states attributes year 2022 as a period of sustained anti-smuggling onslaught, zero compromise for duty evasion and diligent facilitation of trade.

Addressing news men on Thursday at the Unit office in Ikeja Lagos on the activities of the year 2022, the Area Controller I charge of the Unit DC Hussien Kehinde Ejibunu disclosed that his men and officers prosecuted their core mandates without fear or favour in all the six states where the unit covers, even in the face of resistance, attacks and tricks in the mode of concealments. 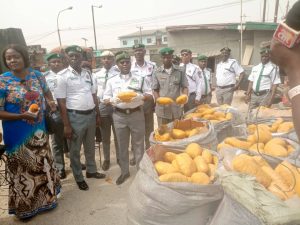 Controller Ejibunu hinted that the Unit also prevented loss of government revenue as its assigned position of being a layer of check uncovered attempts at evading duties. “We were duty bound to carry out our responsibilities. I am glad to report that we shook the smuggling world within our area of responsibility.
We recovered the discovered shortfalls through issuance of demand notices (DN).

“We did all these at the expense of our lives placing national interest ahead of any narrow or personal gain. It is sad to note that some of our officers paid the supreme price last year when they got killed by smugglers. For us, they are the heroes of the anti-smuggling battle and they will never be forgotten”he says.

Ejibunu hinted that aside from protecting the national economy, some of the seizures achieved protection of citizens’ health because dangerous, expired and harmful products were prevented from being smuggled into the country.

He highlighted the items seized in the year under review to include 93,102 X 50kg foreign parboiled rice which amounts to about 156 trailer loads of rice, a total number of 108 automobiles comprising of trucks, tankers, cars and motorcycles were seized either as smuggled items or means of conveyance of smuggled items, Illicit drugs seized within the year under review are; 2,354 kg and 4,976 tablets of Cannabis sativa, 233 cartons X 225 milligrams, and 82 packs X 225 milligrams of Tramadol. 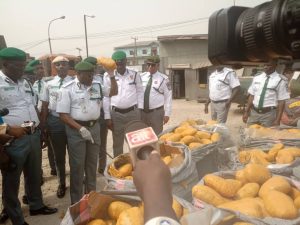 Others are 656,414 liters of premium motor spirit (PMS);. “This is, about 20 tanker loads of fuel from the economic saboteurs who seek to impoverish the majority of our country people by taking out petrol subsidized for citizens’ benefit to be sold in other countries” he said

He added that the unit arrested 176 smuggling suspects in year 2022, secured 7 convictions, while 14 were charged to court and are at various stages of investigation and prosecution, 7 suspects are in detention; 2 suspects were handed over to NDLEA, and 1 suspects was handed over to the Nigerian Police respectively, while 151 are on administrative bail.

Expressing pain, Ejibunu says ” On a sad note, four (4) of our officers namely; Late Inspectors of Customs TP Astor, and A Onwueguzie, and Assistant Inspectors of Customs, Musa, R and Bristol, E lost their lives in active service while confronting smugglers last year. While we frowned at such murderous acts, we also ensured that those behind some of the killings were arrested to face justice”

He hinted that as approved by the NCS enabling laws, the Unit patrolled within its area of responsibility and ensured that smuggled items were uncovered and seized wherever they were hidden.
“Our round the clock patrol is ever recharged as we don’t believe in leave, not even during the yuletide. Those who doubted this and attempted smuggling during the yuletide were shocked at our Christmas and New Year period operations” he added

.Speaking on revenue generation and trade facilitation for the year under review, the Unit boss say “While on our enforcement function, we recovered shortfalls in duty payments and achieved a total collection of Eight Hundred and Seventy-eight Million, Three Hundred and Fourty-four Thousand, Four Hundred and Eighty-six Naira, Ninety-six Kobo. as revenue for the government in 2022.

“This collected revenue would have been lost but for the intervention of FOU ‘A’, checking to be sure correct duties were paid into government coffers.

“Within the period under review, this unit provided support for facilitation of legitimate trade, ensuring ease of passage for compliant traders and double checking suspected non-compliant traders.

He however appreciate the CGC, Col. Hammed Ibrahim Ali and his management team for their unflinching support throughout the year 2022 and the previous years.

He added that for the year 2023, the unit shall sustain and increase the tempo of its anti-smuggling operations while ensuring zero compromise as usual, arresting perpetrators and seizing their wares.