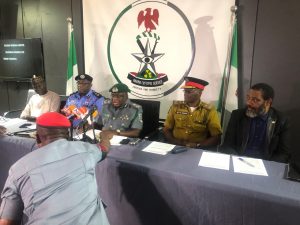 Despite the backdrop in trade which is occasioned by fluctuation in exchange rates which led to drop in purchasing power by consumers thereby making trade unpredictable in year 2022, the Apapa Area Command of Nigeria Customs Service was able to record a revenue increase of 16.7% when compared to what the command generated in year 2021

Addressing newsmen at the command on Thursday, the Area Controller In charge of the command, Comptroller Malanta Ibrahim Yusuf said the feat was made possible because of the resilience of men and officers of the command in blocking revenue leakages and ensuring all unpaid declaration and unutulized PAARs were traced and accounted.to the federal government accounts.

Comptroller Malanta disclosed that the central concern of the service is to deploy technology to automate processes and procedures in maintaining a feat between trade facilitation, revenue generation and security of the nation.

In the area of anti-smuggling , Comptroller Malanta hinted that the command made a seizure of 157 containers with duty paid value (DPV) of #14.4billion as a against 102 containers with DPV of #32.8billion seized in year 2021.

According to Malanta, this was made possible as a result of the commands intensification of it’s anti-smuggling operations through leveraging on its technological infrastructure in ensuring illicit trade posing threat to the nation security and wellbeing of the society are being detected and controlled from finding their way to the market. 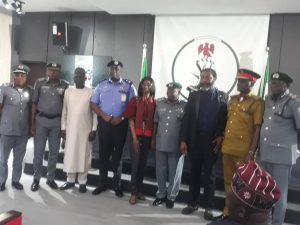 He added that the command has strived to move beyond it’s potentials in ensuring synergy and collaboration with other stakeholders in the port to address the menace of illicit importation.

Comptroller Malanta hinted that fake and prohibited frugs without necessary NAFDAC certification and overdose drugs of tramadol top the list of seizures made in year 2022 with other items such as codeine syrup, foreign parboiled rice, vegetable oil, processed/unprocessed wood, used clothing’s among others.

He added that a total number of 60 suspects were arrested in connection with some of the seizures and are at various stages of investigation and prosecution by the appropriate government agencies.

While speaking on export trade, Comptroller Malanta said ” In line with the federal government diversification of the economy in non-oil export , the command recorded a total of $68.5 million Free On Board (FOB) Value with a naira equivalent of #28.2 billion on non oil commodities with a total tonnage of 6.4million metric tonnes exported through Apapa port.

The command boss disclosed that collaborating with other government agencies and stakeholders has yielded a boost.”The command has promoted a culture of regular stakeholder engagement with bonded terminal operators, importers, exporters, freight forwarders, licensed customs agents, shipping companies and others.

“The need for compliance has always been the thrust of our meetings. We continue to sensitize them on the need to comply with extant trade guidelines for faster and cheaper clearance of cargo and to avoid losing their investment and possible prosecution.

“On this note, I want to specially commend our compliant traders who do sincere declarations, pay accurate duty and obey extant import and export guidelines without violating the prohibition lists, Apapa will continue to create a conducive working environment for you and to protect your investment ” Comptroller Malanta quipped.

Meanwhile, during the briefing the Area Comptroller decorated some of the newly promoted officers of the command.