Federal Operations Unit, Zone ‘A’ of the Nigeria Customs Service, in its intensified anti-smuggling drive intercepted various contraband goods with Duty Paid Value (DPV) of N4,004,258,331.52 between January to December 2017. 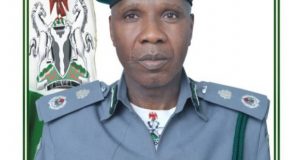 The unit through its interventions recovered a total of N1,956,022,531.65 from duty payments and Demand Notices (DN) on general goods that tried to beat the system from seaports, airports and border stations through wrong classification, transfer of value, and shortchange in duty payment that are meant for the Federal Government of Nigeria. Making the cumulative figure recorded by the Unit in the year 2017 to total N5,960,280,863.00

A total of 179 suspects were arrested in connection to the 1,046 different seizures made within the period, which comprises of foreign parboiled rice, frozen poultry products, vegetable oil, smuggled vehicles, Indian hemp, arms, fake pharmaceutical/medicaments and various general merchandise.

According to the Unit boss, Comptroller Mohammed Uba Garba , ” despite the challenges in 2017, the Unit recorded the highest seizures and revenue so far in the history of Federal Operations Ikeja. He attributed the feat to the focused leadership of the Comptroller General of Customs, Col. Hameed Ibrahim Ali (Rtd) and the entire Management team for their efforts in recognizing hard work and putting square pegs in square holes. “Without the Management motivation and necessary logistic supports, we won’t have achieved this feat within this period”

Similarly, Comptroller Uba while commending the commitment and diligence of the Officers and Men of the unit for thwarting the antics of some dare devil smugglers who used different methods to deceive the service, he charged his officers to be professional and diligent in performing their statutory responsibilities in the year 2018; most especially in the area of anti-smuggling operations by making sure all revenue linkages are blocked.

He enjoined all hands to be on deck in the fight against the economic saboteurs who meant no good for the economy.

He further added that smuggling is a global phenomenon, which cannot be curbed entirely, but can be brought to its barest minimum. The FOU helmsman appreciated all security and sister agencies like the Nigerian Army, Nigeria Police, NDLEA, NAFDAC, SON and others that rendered logistics support and cooperation towards winning the war against smuggling within the southwest zone.

He warned all intending smugglers and their accomplices to desist from such illegalities and invest their money in legitimate businesses, as the Unit has devised other operational modalities that will give them a run for their money and maximum losses, accosted with prosecution and jailed.

Comptroller Uba reminded that the Federal Government policy of banning the importation of Vehicles and Rice through the land borders is still inforce and that the Customs is ever ready and equipped to enforce these polices to the latter.

He as well thanked members of the Forth Estate of the Realm for their support and reportage in 2017, calling for their continuous partnership with the Service in the campaign against the evil of smuggling to the nation’s economy and provides necessary intelligence that could also assist the NCS do their job better in 2018 and beyond.