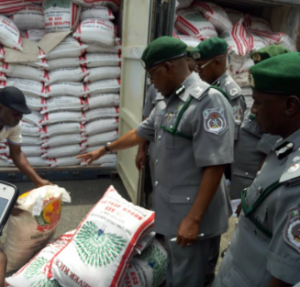 The Onne  Command of Nigeria Customs Service has seized 9by 40ft containers of harmful drugs imported from China and India.
The 9 containers of drugs  contains a total of 8,245 cartons of fake pharmaceuticals which  are tramadol, anti malarial drugs, and analgesics with a duty paid value of N395m were said to be falsely declared as pressure reducing and PVC valves.
The Customs Area Control, Comptroller Abubakar Bashir while conducting press men round the seized items disclosed that aside from the 9 containers of fake pharmaceuticals another 8 × 20 ‘ containers coming from Thailand and carrying 4120 bags of rice falsely declared as sewing machines with Duty Paid Value of =N=64,878,141.48 were seized, making a total of 17 containers with Duty Paid Value (DPV) of  N460,004,053.48.
Meanwhile these great feast were recorded
within the first six weeks of the new year during which period over N11b was garnered into government coffers as revenue from duty collection

While expressing his view on the seized pharmaceutical,  Bashit  said that  he is pleased with the seized drugs as that will debar it from hitting it’s set target.

“We are particularly delighted by this seizure because we recognize the harmful effect they have especially on our youth and the current national challenge of substance abuse”
“Indeed we are resolute in our determination to bring to an end the nefarious act of the illicit trade in fake pharmaceuticals and other dangerous goods, these consignments have been duly inventoried and the Command in line with its mandate has already liaised with NAFDAC for further action.
“We have consistently maintained our policy of zero tolerance for any activity that would jeopardize the well being of Nigerians and have remained steadfast in our commitment to achieve the goals of the Nigeria Customs Service in terms of revenue generation and anti-smuggling” he quipped.