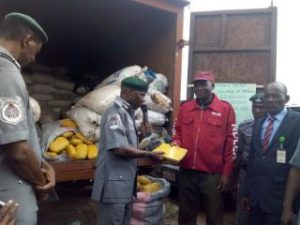 In check mating  the  incessant smuggling of cannabis through the land borders into the  country as it  had  become an eyesore making it  the order of the day for government agencies to be on the look out for deviant unpatriotic citizens to be brought to book, the National Drug Law Enforcement Agency (NDLEA) had  prosecuted 39 persons between January and April over smuggling of  cannabis within Lagos state sub region.

The Staff Officer in charge of operations and intelligence of NDLEA, Lawal Isiaka Opeloyeru who gave the hint when taking delivery of cannabis seized by the Federal Operations Unit Zone A of the Nigeria Customs Service in Lagos said that most of the cannabis were smuggled  from Togo and Ghana to Nigeria through the land  borders and creeks  surrounding Lagos State, adding that  some of the weeds were planted  in Nigeria.

Opeloyeru added that  efforts in the past to liaise with Ghanian government to nip the illicit trade in the bud yielded no positive result but insisted that the two countries are still working together.

“We have prosecuted about 39 suspects this year in Lagos s state command alone. Some of them were convicted and are presently serving their terms of imprisonment.

“Some  of the drugs are coming from Nigeria, some from Togo, some from Ghana.

“In 2016, when something like this was arrested, we contacted our colleagues in Ghana and they tried their best even though we couldn’t hit any positive result but we are working together, ” he stated.

He however called on Nigerians to join in the fight against the menace of drug peddling in the country because according to him, it is capable disrupt the peace and security of the country.

He said the suspects when arrested, often adduce their drug peddling to non employment in the country which he said was not a good reason for anyone to go into drugs.

Uba noted that the seizure of 570 parcels and 98 bags of Indian hemp is so far the highest recorded by the unit. “It is the highest seizure of such hard drugs in the history of FOU A.

“You all know what would have happened if it got to the wrong hands undetected. In the spirit of inter agency relationship, the seized India hemp will be handed over to the NDLEA for further investigation.