…Strengthens Bond with Other Governments Agencies 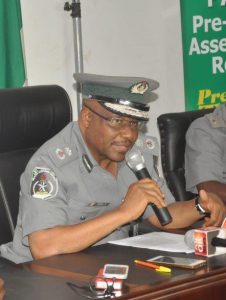 Apapa Area Command of Nigeria Customs Service has generates the total sum of Eighty- one billion, seven hundred and forty- eight million, four hundred and thirty- seven thousand, one hundred and ninety- two Naira (N81, 748, 437, 192.00)  in the first quarter of  the year 2018.

The Command according to Nwala is optimistic that with the roll out of the Nigeria Integrated Customs Information System II (NICIS II) in Apapa which is expected to block all revenue leakages as well as the repairing of the Apapa axis roads, the Command will build on her revenue profile in the months ahead. 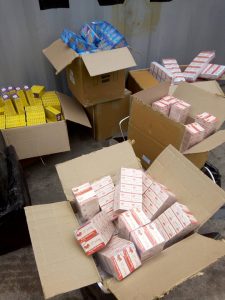 The  Area Controller, Jibril Musa as stated in the release,  has continued to reinvigorate all strategies and mechanisms put in place for the effective and efficient implementation of the Federal Government’s Executive order on the Ease of Doing Business.

” It is worthy of note to mention that the NCS is the lead Agency in the implementation of the presidential mandate and Apapa Area Command selected as the pilot command had since created the Central Examination Centre (CEC) where all stakeholders involved in cargo clearance Conduct examination at an agreed time with reports imputed almost immediately. This synergy/interfacing had paid off remarkably as consignments with no record of infractions are released within 24 hours while those with infractions are referred to dispute resolutions committee for further interventions/investigations” his words. 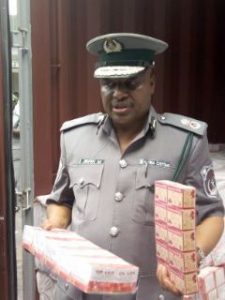 The command In its anti- smuggling drive has in the first quarter recorded 4 seizures of 4×40 ft containers of controlled drugs including tramadol in excess of approved milligrams with a duty paid value of N110, 016, 524. 00million, while recording  a total of about 280,000 metric tons of various exports with a total FOB value of $115,093,562 US dollars in the same period.

On inter agencies relationship, the Command boss  has pledged his resolve to keep strengthening the already robust working relationship/collaboration among all agencies of government for an enhanced international trade facilitation.

Recalled that within the period under review the command played host to different high-level Government delegations from within and outside the country with a view of promoting efficiency and facilitation of trade in the country.

The visiting governments officials are Senate Committee on Customs led by its chairman Sen. Hope Uzodimma, a delegation from Japanese Customs led by the Japan ambassador to Nigeria, National Committee on trade facilitation led by its Chairman Mr. A. M. Abubakar, New Commander Nigeria Navy Clearance Agency, NAFDAC Director in charge of ports inspection Prof. S. B. Adebayo and a delegation from NTA.

Others who visited the command include one of the NCS reform champions, DC Tony Anyalogu who sensitized officers on revised government fiscal policy in line with the presidential executive order and the new palletization policy.