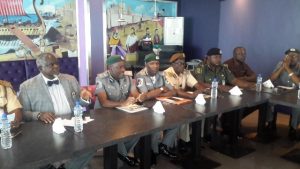 The Nigeria Customs Service, Seme Command has launched an aggressive move to rid the land border command of impostors and touts, and a clean up initiative to reclaim customs land from illegal occupants and land grabbers.

The aggressive move launched on the Miscreants and touts popularly known as ‘kelebes’ operating at the Seme border which is tagged ‘Operation Flush Out Touts from Seme Border” has landed the tout  a  red card to leave before they are apprehended.

According to a statement by the command Public Relations Officer, Taupyeng Selcheng,  it informed  that the Customs Area Controller,  Comptroller Mohammed Aliyu  decision was reinforced by evidences that these kelebes have formed the habbit of impersonating officers in the commission of crimes and illegalities.

They mislead and deceive travelers who falls victim to their illegal activities. According to the statement, the Customs boss has appealed to members of the public traveling along the Lagos-Abidjan corridor to be wary of these criminal elements, warning Nigerians and other nationales using the international border axis not to deal with anyone not on customs uniform. 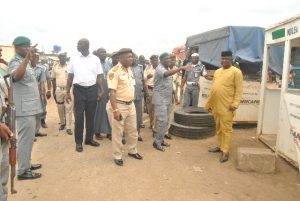 Similarly in the bid to give the Command improved ambience in tune with international land bother appearance, the command boss has come up with an initiative designed to eliminate all unwanted structures that has defaced the environment and constituted social and physical eyesore.

Comptroller Aliyu who disclosed this recently , said all illegal occupants of customs land should vacate the land immediately and remove their structures, even as he advised those with any semblance of official claims to seek clearance from customs headquarters.

A statement by the command Public Relations Officer said the customs area controller has warned of imminent demolition of all illegal structures, hinting that the customs headquarters is determined to ensure that Seme acquire the right international border outlook that meets regional and international standard.

The statement reads in part: “The Customs Area Controller, Compt. Mohammed Aliyu, who has taken many decisions that has hitherto led to the unprecedented successes recorded in the operation and administration of Seme Command is still taking some proactive steps to give Seme main border an international appearance.

“Critical amongst the decisions is the patriotic initiative and action of reclaiming the Command  land that has over the years been encroached on illegally by unscupulous individuals without approval.

“The Customs Area Controller with the consent of the headquarters is sanitizing the gateway corridor that use to wear a picture that does not give an international outlook nor meet the global standard compared to other international land borders within the West African sub region. He has said that the time to act is now lest posterity judge us wrongly”

The command boss said he is leaving no stone unturned in ensuring that illegal structures are demolished and those with approval re-directed to update their status by routing their requests to the Comptroller General of Customs through the Customs Area Controller.

The statement also quoted the area controller of expressing dismay over the illegal occupation, noting that the land which was gazetted in 1978 by the Land Act decree of the Federal Government of Nigeria would not be allowed to be taken over by anyone and urged all illegal occupants to make haste and quit before it is too late.

Mohammed told Nigerian Ambassador to Togo, Mr. Joseph Olusola at a recent engagement at the border that the clean up initiative is total and unstopable.