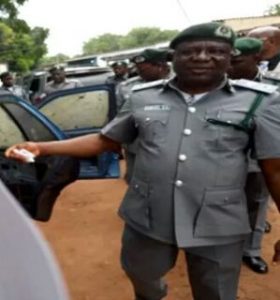 In the quest to. halt the nefarious activities of smugglers along  the boarder way,  the  Ogun Command of Nigeria Customs Service has intensify it’s operational effort to ensure their illicit activities are drastically reduced.

The. command recently made a seizure of 51 vehicles with various other items and a  spectacular seizure of  2018 model Range Rover with duty paid value of N64m  from suspected smugglers.

This was made known to news men at the Command  by the Area Controller,  Comptroller Michael Agbara, at Idiroko border where he showed recent seizures of smuggled items . 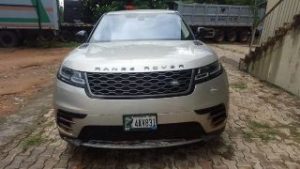 Agbara who said the vehicle will enhance his command’s operational profile, declared total war against smugglers and perpetrators of other economic crimes like evasion of duty payment. and effectively managing attacks from suspected smugglers and their sympathizers.

A breakdown of the seized vehicles indicates that 19 units were seized directly while 32 were  seized as means of conveyance carrying other seized woods.

Most spectacular among the seizures is a brand new Range Rover (velar) 2018/2019 model seized and tagged “the seizure of the month.

”The aforementioned achievements notwithstanding call for concerted efforts of the media, traditional rulers and eminent personalities in fight against smuggling.

”They are expected to discourage their wards that indulge, aid and perceive smuggling to be a legitimate way of livelihood.

Permit me to seize this opportunity to inform you that 6, 750 bags of rice (50kg each), 610 jerry cans of vegetable oil (25 liters each), 59 bags of sugar of 50kg each, 326 bales of Secondhand clothing, 100 cartons and 5703 pairs of different forms of shoes among other items will soon be evacuated from both Abeokuta and Idiroko Government Warehouses by Nigeria Army Corps of Supply and Transport for onward delivery to IDPs in Borno state.

”We are elated to inform you that our success story is incomplete without mentioning the support and cooperation we are receiving from Nigerian Army, Nigeria Police, Department of State Services, National Drug Law and Enforcement Agency, Nigeria Immigration Service, Nigeria Security and Civil Defence Corps among other Agencies”