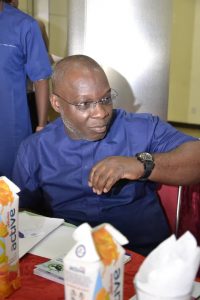 An interview with the Chairman House of Representatives Committee on Anti- Corruption, Hon.Akinloye Babajide during a workshop on prevention of revenue leakages in the maritime and oil sectors, organised by the Association of Maritime Journalists of Nigeria (AMJON) in partnership with House Committee on anti-corruption  in recently
Lagos . Excerpts
Q:How would you appraise Nigerian’s fight against corruption?
Ans: It’s a gradual thing,  we started earlier  before now,  I don’t think we have the political will which has always been the problem  to fight corruption.
But now we have seen a very much  determined government who are ready to fight corruption. The level in which is fought now may not be the way we  want it, but I believe if we continue, we will get our society back to where we should be.
Q: What is your impression about our rating as a poverty Capital of the World ? 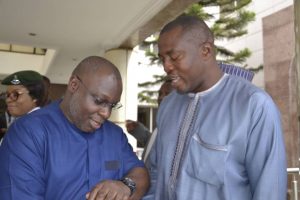 Ans : It’s sad,  extremely sad , been rated as poverty capital of the  world,   especially if we want to compare that statement to the natural resources God  have given to this country,  it is nothing but a sad statement and I believe this particular government will address that issue to the best of their ability.
Q Sir do you believe that we are winning the war against corruption and revenue leakages?
Ans: That we even started is a plus,  how far we are going is another thing. If we have not started we can say we are downgrading .I believe that with time if the momentum should continue we will get to the promised land.
Q:What is your assessment of Civil servants  and  citizens compliance in the fight against. Corruption ? 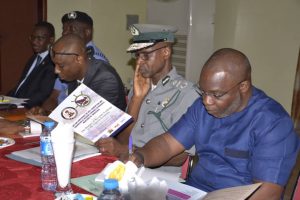 Ans: Civil Service is an essential  part of the government of this country,  infact there is no government that as  will succeed without a Civil Service. I believe that the Civil Service can be reform in such a way that the fight against corruption can succeed, because I know that  is the focus of ICPC, it is their cardinal objective of preventing corruption, I think it will go a long way.
Q: The Customs had spoken today about their handicap particularly about their scanning machines. whose responsibility is it to provide,  is it government,  terminal Operators or the Customs itself?
,Ans: To me in particular I don’t believe that government should get involved in the business situation. However, government is to  make regulations that is my belief . So the government should make the environment conducive for who ever is charged with that responsibility to  strive, but for the government to dabble into the business responsibility,  I don’t agree with it.
Q: What advice will you give to Nigerians generally interns of corruption and revenue leakages ?
Ans: Well, my advice is that Nigerians should do what is right,  either from our homes to the institutions that have been created to the very level of our political class.  We should all do the right things, that is my take.
Q: A question was asked from the government about not parading suspects,   what is your take on it in this regard.  Will you advice the Customs to follow suit like the police by making the world see their suspects?
Ans: Well, Customs have been given responsibilities , if it is part of their responsibility to persecute, the way and manner they go about it is equally their responsibility. However am not a party to a situation where you parade suspects because they have not been Condemned , am not in tandem with that process. As a lawyer they are still suspects until they are tried in the court and sentence, that’s when you can condemned them. But a situation where you are  parading them as  suspects  it means you have already condemned without trial and am not a party to that.