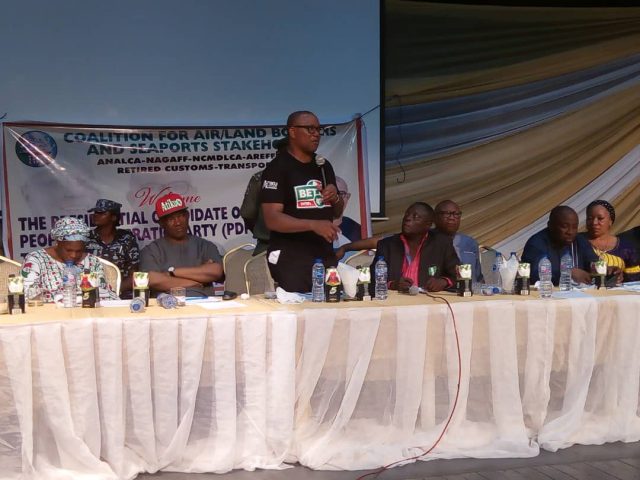 •Asked APC government  to give account  of their regime


The Presidential Candidate  of the Peoples Democratic  Party (PDP),Alhaji Atiku  Abubakar  has said that  Nigeria loses over $20billion annually  due to Ports inefficiency  and decayed infrastructure.

Atiku who promises to reverse the trend if voted into power in 2019 made the  pledge during  a town hall  meeting  with  maritime stakeholders in Lagos  yesterday.

Atiku who was represented  by his running  mate  and  former governor  of Anambra  State Mr Peter Obi  said that the Nigerian ports system is not working, even as he alleged that importers making use of Nigerian ports to ship their cargoes are made to pay extra $1,000 Dollars abroad on every  container shipped into Country.

According to him, in order to make the eastern ports busy and viable, there is need to make it cheaper to clear cargoes there than in Lagos. This he said his government will grant  incentives to those using the eastern ports to attract  patronage.

He blasted the APC government saying “How can you say Nigeria is working and you have an ease of doing business if the roads leading to your ports are  in bad shape? It simply shows a government that is not working”

“For every goods you ship from anywhere in the world into Nigeria you pay additional $1,000, the reason why you are paying that is because of the inefficiency of Nigerian Ports.

“The ports today have not been expanded from what it was from when they were built, nobody has given them any attention and we are not even building new ones. Singapore was the busiest port in the world, and as it is, they are building the busiest and biggest port under the sea, this would start in 2050, but here we are not doing anything, we are busy making sure that the ones built is not working”
Atiku said.

On the traffic gridlock in Apapa due to bad roads, Atiku assured the stakeholders that fixing the Apapa Oshodi expressway could be completed in less than one year.

“The Apapa -Oshodi expressway is not more than 10km and its won’t take any serious  government  more than a year to fixed it,  it’s not rocket  science,  but matter of incompetence  and ineffective  leadership ‘

According to him, running a business and running the country is the same thing. He vowed to deploy his business acumen in development of the ports.

He challenged the Buhari administration  to show  Nigerians their achievements  before asking  them for another  term.

“Give us the account of your first tenure before telling  us to give you another  term.  If I give you money to trade you will have to give me the account  of the first  money before  you asked for another  one,  that is what we are  asking  the APC government ” Atiku said.

He promised that  is voted to power  the “Atiku/Obi presidency would make Nigeria work. Atiku has experience in governance and in business he has built  schools so he knows  what education  is, people cannot offer what they don’t have, imagine Atiku as an ex Custom Officer and myself being a trader, the port will turn around” he assured.

The Association of Nigeria Licensed Customs Agents (ANLCA) in a document presented by its Vice President, Mr. Farinto Collins said even though the port as a critical sector generates N5billion daily into Federal Government’s purse, the government has abandoned it.

He said that maritime operators regretted galvanising over 30,000 votes for President Muhammadu Buhari in year 2015, saying that most of the promises made were never fulfilled.

One of the promises according to him was made by the current Vice President, Prof Yemi Osinbajo on revision of the Auto Policy, he said the policy has succeeded in sending many clearing agents out of jobs which they never fulfilled.

Other challenges itemised by Farinto includes bad access roads leading to the nation’s port, foreigners practicing custom brokerage in Nigeria. He called for indigenization of the profession.

The ANLCA vice President also stressed the need to review the Customs and Excise Management Act and a creation of a Ministry of Maritime.

He called for the development of a port development plan, saying that all the ports in Nigeria currently have been overstretched.

The Initiative  for Rapid Development of Nigeria one of the strong support  group  for the Atiku/Obi presidency also submitted  a highlights of mydrids of Problems  facing stakeholders  and the Nigerian  ports which need urgent attention.

Some of the issues  the IRDNIGERIA  enumerated  in their paper includes government policies,  Legislations, high cost of doing  business  in Nigerian  ports, Corruption, infrastructural  decay among others. The group said they believe that Atiku Abubakar  will address the issues  when he comes to power  in February  this year.

The Lagos State Governorship flag bearer of the PDP, Mr. Jimi Agbaje was also at the forum accompanied by his running mate. He assured that if voted into power as the next governor of Lagos  State,   the traffic gridlock in Apapa would be addressed.

The event was put together  by Chief Peter Okocha, Chairman Chrismatel Group , Dr Basil Nwolisa, Chairman  IRDNIGERIA  Ifeanyi Okunbor ,  Innocent   Orok and  Dr Eugene Nweke . Others are Sir Aloy Okwu, Chief Festus Ukwu, Chief Ik Mbulu and Chief Basil Onyeanusi among others to draw  the attention  of the Atiku/Obi presidency to the plight of the Maritime  sector and how to address  them when the got into power.