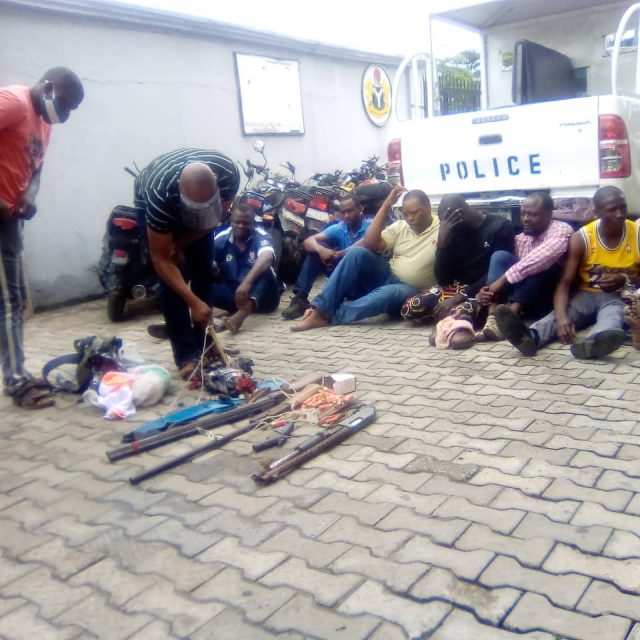 Weapons, Charms, Others Recovered
The Nigeria Police in Lagos has recovered arms and ammunition, charms and a VW Bus, as well as suspects who carried out the  destruction at the Association of Nigerian Licensed Customs Agents (ANLCA) headquarters  office at Amuwo Odofin in Lagos State at the early hours of Tuesday, 6th October, 2020.

The ANLCA headquarters  was invaded by armed thugs numbering over 40 recently. They broke into the edifice, chase away staff and  cart away  valuable documents, cash among other items.

The  alleged criminals who were fully armed with  guns, machete, charms   machetes  a Police Inspector ,  who is now in a critical condition at the hospital, when the police arrived the scene to restore normalcy.

A source who witnessed the havoc said  the arsonists were wearing  the  Western Zone Task Force I’D Cards of ANLCA led by National Publicity Secretary  of Oodua Logistic  Association, Yemi Hasstrup.All the items have been seized by the Lagos State Special Anti-Robbery Squad ( SARS) and ten suspects also arrested.

According to the Police Public Relations Officer, Lagos State Command, Superintendent  of Police Olumuyiwa Adejobi, he said, “They said they were fighting union crisis and the likes of other things, I think the Unions have been having some issues. Some Men went there at their secretariat with guns, matchete and other weapons to go and attack some people there in the secretariat.

” The police was called and when the officers went there, they were attacked and one of our Inspectors was matcheted and seriously injured.

“We arrested some of them and recovered guns, cutlasses, ammunition and offensive weapons from them.The Commissioner of Police Lagos State has directed that the matter be handed over to the SARS Lagos State for proper investigation and the investigation is on”.