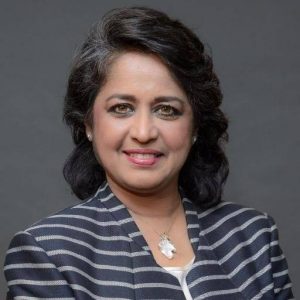 The former President of Mauritius, Prof. Ameenah Gurib-Fakim is to deliver the keynote paper at the Murtala Muhammed Foundation (MMF) 2018 Women in Development: Enterprise Across African Program and Power Lunch in Lagos next week.

The MMF Chief Executive Officer (CEO), Aisha Muhammed-Oyebode in a release signed yesterday, said the event was in furtherance of its core vision to improve the living conditions of Africans by contributing to reduction of poverty and limitation of conflict, while promoting self-reliance and self-fulfilment.

Muhammed-Oyebode hinted that this year’s edition with the Theme: ‘SMART ECONOMICS: EMPOWERING WOMEN IN A CHANGING WORLD,’ will have as the guest speaker Her Excellency Prof. (Mrs.)  Ameenah Gurib-Fakim, former President of the Republic of Mauritius (2015-2018)

Also, the Women’s Power Lunch, she said “will attracts the attendance of a cross generational audience of women leaders and influencers from all walks of life including government, the private sector, civil society, academia/students, media and the arts.

“So long as there is a continued reluctance to embrace the idea of female authority figures of women in power and leadership, and the gender gap remains as it is, sustainable development may continue to elude us on this continent. Can you imagine how the narrative on Africa would change if women are given their rightful place at the table? This is why the women who have broken these barriers are such powerful and compelling heroines.”

The event, which holds between July 18-19 2018, MMF CEO added, “will address pertinent developmental issues relating to African women and afford the women opportunities to expand their business through networking, partnership, sharing of ideas and exhibitions thereby empowering Nigerian women entrepreneurs for effective, critical and pride of place the economic independence of Africa, thus preparing them for principal roles in the political management of the future of the continent.

“The Women’s Power Lunch is fast becoming a prominent feature in the annual calendar of women’s events in Africa in an ambiance that stimulates robust engagements, rich discussions and networking opportunities”.

The release recalled that the first edition of the Women’s Power Lunch featured Her Excellency, Mrs Gracia Machel Mandela DBE, the former first lady of South Africa and Mozambique, as Keynote Speaker. While the second featured the former President of Malawi, Her Excellency, Joyce Banda.