Aminu Dahiru,, Assistant Controller General of Customs and  Zonal Coordinator in charge of Zone A, Lagos, has blamed importers and licensed Customs agents for insincere declarations as agents are at vantage positions to advise importers on the need to comply with rules and pay duties.

The ACG who  said this while responding to some licensed customs complaints about alleged multiple checks in Lagos during an interactive session with some stakeholders as part of his midyear tour of commands under his watch also disclosed that customs will not compromise  national security and revenue collection to facilitate trade.

He reiterated that customs will continue to double check consignments cleared from the ports whenever it deems it necessary in line with the law, as outcome of many of such checks reveal infractions and attempt at either evading accurate duty payment or outright smuggling..

He added that 7 out of 10 consignments checked based on information and suspicions turned out to be carrying contraband, hence faulting importers and licensed Customs agents for not always been sincere with declarations. 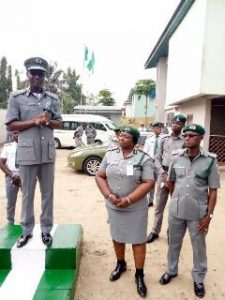 He identified revenue leakages such as concealing dutiable goods in containers or vehicles without declaring the concealments.

He identified that some Chinese business persons have made importation into warehouses that have been seized for breach of procedures.

While commending owners and managers of factories under excise watch at the Lagos Industrial Command,Dahiru admonished them to stick to the rules.

He lauded their contributions to national economic growth in the areas of creating employment, adding to the Gross Domestic Product (GDP) and payment of Customs duties.

“I cherish manufacturers, I value them and will not allow them suffer unjustly while contributing their quota to our national economy.

“Feel free to contact my office on any matter relating to Customs operations in this zone. We,as Customs will continue to facilitate legitimate trade.

“We will do all we can to support you within what the law permits. Whatever is beyond our powers, we shall promptly refer to our Headquarters for directives.

“Customs is not the approving authority for increase in excise duties, we are only implementing the policies of government. We understand your complaints over increase in tariff for produced alcoholic beverages. We may only pass it as a report to higher authorities while we carry out implementation as directed”

Controller of Lagos Industrial Command, Mrs. Morenike Owodunni also said the command has been moving to discover new manufacturers whose operations are excisable.

She told the visiting ACG that her command is faced with logistics constraints such as inadequate and up to standard vehicles.