The anti-smuggling czar of Federal Operations Unit (FOU)  ‘A’,  Comptroller Mohammed Uba Garba, has  officially took over the mantle of leadership as the new Area Controller of Seme border  command of the Nigeria Customs Service (NCS).

In a brief ceremony conducted at the Seme Customs conference room, Comptroller Mohammed Aliyu formally handed over the command with the signing of the Handing/Taking over notes by both Comptrollers.

In his remarks, the outgoing Controller thanked the Comptroller General of Customs, Col. Hameed Ibrahim Ali, rtd., for the opportunity given him to serve and contribute his quota in the development of the nation.

He promised to continue putting in more efforts at his new place of assignment and equally prayed for the success of his successor.

He disclosed that his tenure witnessed an unprecedented increase in revenue and seizures despite the numerous challenges. 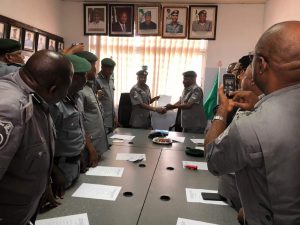 He also said that the command seized over 39,950x50kg bags of rice which is equivalent to 66 trailer trucks adding that over 28,000 bags of rice were sent to the Internally Displaced Persons (IDPs) camps based on existing Federal Government policy.

In addition to that, thirty seven (37) exotic vehicles were also confiscated. Also seized were various medicaments and other perishable items which were duly condemned and destroyed.

He also took some proactive steps to give the Seme area an international outlook; critical amidst them is the reclaiming of the Seme border customs land that had over the years been encroached on illegally by unscrupulous individuals without due process and approval; by sanitizing the gateway corridor.

He also reduced the miscreants and touts called “Kelegbes” who infiltrated the border and hindered trade facilitation while also blocked an illegal passage by building a wall to the joint border post to ensure border security.

In his remarks, the new Customs Area Controller, Comptroller Mohammed Uba Garba expressed his gratitude and wished him God’s guidance in his new place of work.

He also reminded the Customs officers of the importance of discipline in the discharge of their duties as according to him, teamwork, commitment and dedication to duty was essential in achieving success towards moving the command to greater heights